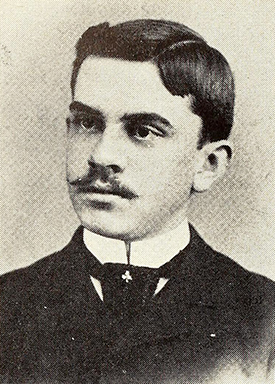 George Thomas Brown, tobacco manufacturer, was born in Mocksville, the son of Rufus D. and Sarah Gibbs Brown. Rufus Brown and his brother, Dr. William Brown, had a small tobacco factory in Mocksville, which they moved, along with their families, to Winston in about 1875. This firm, Brown Brothers, was thus among the pioneer tobacco businesses of Winston; it continued in operation for many years after the death of Rufus Brown in October 1893.

George Brown was educated in the schools of Winston and at Davidson College, which he attended in 1887–88. In 1893 he married Elsie Thompson, whose sister, Minnie, was the wife of Robert Lynn Williamson. The two brothers-in-law formed a partnership for the manufacture of chewing and smoking tobacco, even though the effects of the financial Panic of 1893 were in full force. They took over the factory and brands of T. F. Williamson Tobacco Company, another pioneer tobacco firm in Winston, and began operation as Brown and Williamson on 1 Feb. 1894, with capital of ten thousand dollars and thirty employees. George Brown had received this ten thousand dollars from his father; he bought with it one hundred thousand pounds of tobacco, and he took charge of the office and buying for the partners. His brother-in-law, with the technical knowledge and practical experience, took charge of the manufacturing operations. In 1906 the business was incorporated in North Carolina as Brown and Williamson Tobacco Company, with Brown president, which office he held until his death, and Williamson vice-president.

Brown was taken ill suddenly at his home in Winston in the early evening of 26 Nov. 1913 and died the next day. He was buried in Salem Cemetery beside his wife and their only child, Minnie, who died in infancy. Brown was a member of the board of trade and the tobacco board of trade. He belonged to the First Presbyterian Church of Winston and served on its board of deacons; he was a Mason, Shriner, and Knight Templar and a charter member of the Twin City Club.