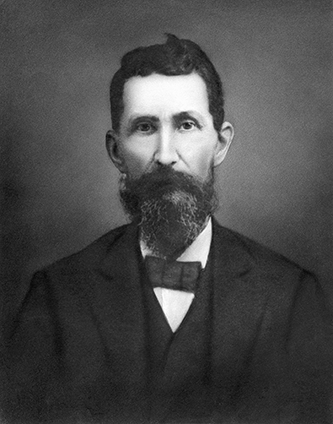 William Albert Gallatin Brown, Baptist educator, was born in Blount County, Tenn. His father was Jonathan Brown and his mother Rebecca Bowers Brown. When he was twelve years old, his father moved to Sevier County, Tenn. No church being convenient to the area, meetings were held in the Brown home, and eventually the Sugar Loaf Baptist Church was organized. At the age of twelve, William converted and joined the Nails Creek Baptist Church.

In 1856 he was graduated from Mossy Creek Baptist College (now Carson-Newman College), Jefferson City, Tenn. Immediately after graduation he went to Mars Hill as the first president of the French Broad Baptist Institute, now Mars Hill College. In 1858 he left Mars Hill College and went to Hendersonville to become editor of the Bapist Telescope, serving in this position until 1860, when he returned to Mossy Creek Baptist College as a professor of mathematics. In 1861 he resigned from the college to enter the Confederate Army. He served through the Civil War, although wounded at the Battle of Chickamauga. After the war he returned to teaching and for nearly fourteen years, during the trying period of Reconstruction, devoted himself to building and reestablishing the schools in his native Tennessee. In East Tennessee he served, either as founder or as teacher, Mossy Creek Female Institute, Mary Sharp College, Pineville Institute, and Riceville Institute.

When Judson College, Hendersonville, opened on 27 Jan. 1879, Brown was chosen principal and chairman of the faculty. He remained with Judson intermittently until 1887. When, in that year, the citizens of Fairview in Buncombe County erected a modern building and opened Fairview Collegiate Institute, Brown became the first principal and served there two years. He was near the end of his teaching career, since a growing deafness was making teaching increasingly difficult for him, but he did teach a short time in Brevard and later assisted his son Fred in a school at Dewitt in Henderson County. He wrote a great deal of poetry during his later years.

Brown married Margaret Amanda Pattison soon after his graduation from Mossy Creek. They had seven children, five boys and two girls, two of whom died in infancy. Three of the sons, Alfred Erskine, H. Dudley, and Thomas Luther, became ministers; the other son, Frederick Adolphus, and the daughter, Mrs. Sallie Adaline Brown Walker, became teachers. Brown's wife died 31 Jan. 1888. He died at the home of his son T. Luther. His body was returned to Fairview and buried with his wife and son Dudley in the old Cane Creek Cemetery.