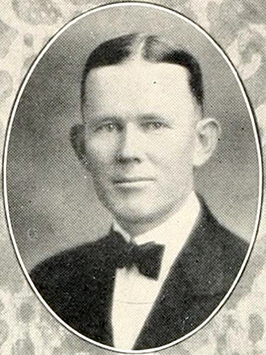 Leslie Hartwell Campbell, educator, was born at Buies Creek. He was the oldest of the three children, two boys and one girl, of James Archibald Campbell, founder of Campbell College, and Cornelia Frances Pearson Campbell. His first Campbell ancestor in the New World was James Campbell, a Scotsman by blood, who came to North Carolina from the North of Ireland before the American Revolution. Leslie Campbell's paternal grandfather was the Reverend Archibald Neill Campbell, a long-time Baptist minister in the Harnett County area. Leslie's brother, Carlyle, served consecutively as president of Coker College, Hartsville, S.C., chairman of the Department of English, North Carolina State College, and president of Meredith College. His sister, Bessie Campbell Lynch, taught music at Campbell College and its predecessor institution, Buies Creek Academy.

Campbell received his elementary and secondary education at Buies Creek Academy, which was operated by his parents. In 1908 he entered Wake Forest College, where three years later he received the A.B. degree, magna cum laude, graduating in the same class with his father and his brother. The following autumn, he began teaching at Buies Creek Academy. He lived at home and, though he was given no salary, he received money from his father as needed. In 1916 he received the A.M. degree from Wake Forest College, and at about the same time he left teaching to operate a large general store in Buies Creek. In 1920 he returned to Buies Creek Academy, where he taught in the various grades. The academy then operated the public schools of its community and in fact continued to do so until 1946.

In 1925 the Baptist State Convention of North Carolina acquired Buies Creek Academy from J. A. Campbell for less than $25,000. The following year the academy became Buies Creek Junior College, adding the first two years of college work to the courses it continued to offer at the elementary and secondary levels. Leslie Campbell was appointed the first dean of the new college. In 1926 the Baptist State Convention changed the school's name to Campbell College in honor of its founder, Leslie's father, who remained president until his death in 1934. Leslie Campbell succeeded his father as president of the college, which then had an enrollment of only 312 students and was facing serious financial problems brought on by the depression. During his first year as president, Campbell's salary was less than one thousand dollars.

From 1934, the first year of Campbell's presidency, to 1937, the Baptist State Convention was unable to give the college any financial support. Vegetables and other produce were frequently accepted in payment of tuition and fees. After 1937 the state convention resumed financial support, and in 1941 the school received full regional accreditation as a junior college.

Campbell College grew rapidly after World War II. Between 1954 and 1959 at least one major building a year was added to the campus, and by the later year enrollment had climbed to over nine hundred students. In 1961 the college became a senior institution, and sixty-nine-year-old Campbell embarked upon perhaps the busiest and most challenging eight years of his life. In November 1966 the college received full regional accreditation as a four-year liberal arts college, and on 1 June of the following year, Campbell retired as president. During the thirty-three years of his presidency, the school had grown from a struggling junior college of slightly over 300 students to a fully accredited four-year college with an enrollment of over 2,200 and a faculty of over 120, located on 570 acres, with total financial assets of over $7,000,000 and an annual operating budget of over $2,700,000.

A Democrat and a Baptist, Campbell was active in community and denominational as well as educational affairs. He served as trustee of both Pittman Hospital and Good Hope Hospital, president of the Harnett County Centennial Association (1955) and of the Harnett County Historical Society (1956), director of the Capital Area Development Association (1956), moderator of the Little River Baptist Association (1937–54), and first president of the Association of Eastern North Carolina Colleges (1966). In 1930 he was vice-president of the Baptist State Convention. He served for many years as a deacon of the Buies Creek First Baptist Church and was a principal founder of the Memorial Baptist Church, Buies Creek. In 1955 his alma mater, Wake Forest College, recognized his achievements as an educator and civic leader by bestowing upon him the honorary LL.D. degree.

In 1914, Campbell married Viola Haire of Cumberland County, who died in 1920. They had one son, Arthur Hartwell, state legislator and pioneer television executive. In 1925, Campbell married Ora Green, who survived him. With her he had four children: Catherine McLean Campbell King, Elizabeth Pearson Campbell Dail, Ora Green Campbell Elyson, and James Archibald, a physician in Charlotte. In the spring of 1970 Campbell suffered a severe heart attack from which he never recovered. He died of heart failure in Rex Hospital, Raleigh. Following funeral services in the Turner Chapel of Campbell College on 27 Nov., he was buried in the Buies Creek Cemetery. A portrait by William Fields hangs in the foyer of the president's office on the campus of Campbell College.

North Carolina General Assembly. "A Joint Resolution Honoring Dr. Leslie Hartwell Campbell upon the Occasion of his Retirement as President of Campbell College." Session Laws and Resolutions Passed by the General Assembly at the Extra Session Held in the City Of Raleigh. Winston-Salem, N.C.: Winston Printing Company. 1967. 1957-1958. http://digital.ncdcr.gov/cdm/ref/collection/p249901coll22/id/314580 (accessed October 8, 2013).