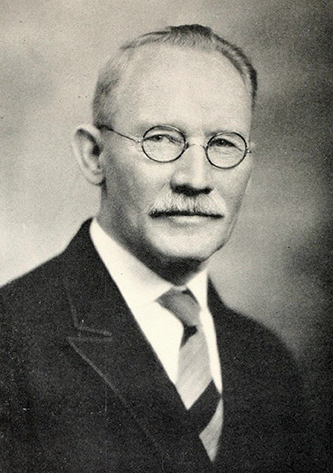 James Archibald Campbell, educator and Baptist minister, was born in Harnett County, between the towns of Angier and Fuquay. He was the only surviving child of Archibald Neill Campbell and Huma Maniza Betts Campbell. The Campbells date their entrance into America from 1739, when a boat-load of Scots known as "The Legion of Restless Men" came to the Cape Fear Valley, in the general area of Fayetteville. The father of James Archibald Campbell, known as "Mr. Archie," was a part-time farmer, sometime blacksmith, and full-time Baptist preacher. He organized sixteen Baptist churches and baptized more than a thousand persons, the first of whom was his son James Archibald.

When young Campbell was six years old, he attended for a few months a one-room subscription school near his home. At the age of ten, he, along with his father, enrolled in a grammar school, also near his home. When he was seventeen, he attended for one year a boarding school in Apex. The following year he entered Oakdale Academy in Alamance County, near the town of Graham. He stayed there for two years and then was asked to assume the leadership of a newly organized school, Union Academy, in his home community. As principal of this school he was successful and was urged to continue, but he was eager for additional schooling himself. On his birthday in 1885 he became a student at Wake Forest College, where he remained for three school terms; in the spring of 1886, his financial situation made it necessary for him to return home, and his formal education ended for the time. In 1911 he and his two sons received the A.B. degree from Wake Forest College. In 1926 the college awarded him the honorary D.D. degree.

On 5 Jan. 1887, Campbell opened a private academy, under his ownership, at Buies Creek. He was to get no salary for his teaching, his only compensation coming from the small tuition paid by his students. There were sixteen of these on the first morning: Buies Creek, a community of seven families, had been without a school for three years. The school took as its motto, "Ad Astra per Aspera"—To the Stars through Difficulty. The school grew until by 1900 it was one of the largest private academies in the state. Then on the night of 20 Dec. 1900 the school burned; arson was suspected. The only building left was a large floorless tabernacle used for commencement gatherings. This was equipped with rough benches, and the school reopened at the scheduled time in January 1901. Again it prospered.

In 1925, Campbell presented the school to the North Carolina Baptist State Convention. He had spent thirty-eight years in building it, and the property was valued at a half million dollars. Campbell received a little less than twenty-five thousand dollars, the figure he had suggested, but he continued to operate the school. In 1926 the institution was elevated to the status of a junior college, and the name was changed from Buies Creek Academy to Campbell Junior College.

Campbell was an active Christian minister as well as an educator and pastored Baptist churches during all the years he headed the school. There were times when he was pastor of five churches simultaneously. His school at Buies Creek was only four years old when he became pastor of the local Baptist church. In 1895 he resigned as pastor of the church, but in 1898 he accepted the position again and kept it until he died. During these years he was active in his denomination. He served as trustee of Wake Forest College for an unusually long time, long enough to vote for three presidents of the institution. He was also a member of the Democratic party.

On 18 Nov. 1890, Campbell married Cornelia Frances Pearson. Three children were born to them: Leslie Hartwell, who succeeded his father as president of Campbell College; Carlyle, president of Coker College in Hartsville, S.C., and Meredith College in Raleigh; and Mrs. Bessie Campbell Lynch, who taught music at Campbell for more than forty years, much of the time as head of the department.

Campbell's portrait hangs in the president's office at Campbell College. His body rests in the village cemetery near the school he founded. On 1 Apr. 1971, his name was entered into the North Carolina Education Hall of Fame.