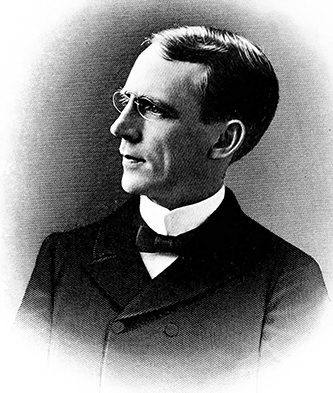 Robert Fishburne Campbell, Presbyterian clergyman, was born the son of John Lyle and Harriet Hatch Bailey Campbell at Lexington, Va., where his father was a member of the faculty of Washington College (later Washington and Lee University). For five years during his early boyhood he was next-door neighbor to General Robert E. Lee. He attended Washington and Lee, graduating in 1878 with the B.A. degree, and after a year of further study he received the M.A. degree. Following a period of teaching in West Virginia and in his native state (1879–82), he entered Union Theological Seminary in Virginia; he was graduated in 1885.

Licensed on 30 Aug. 1884 and ordained to the gospel ministry on 18 May 1885 by Lexington Presbytery of the Presbyterian Church, U.S., he served as pastor of the Millboro and Windy Cove churches in Virginia from 1885 to 1889. After other pastorates at Davidson (1889–90) and Buena Vista, Va. (1890–92), he went to the First Presbyterian Church of Asheville in 1892. There he remained until his retirement in 1938, when he became pastor emeritus. The Campbell Memorial Chapel of the Asheville church bears testimony to the esteem in which he was held by the congregation. His denominational service included membership on a number of important committees of the general assembly and on the boards of several influential institutions. He was the moving spirit in the formation of the Synod of Appalachia in 1915 and the leader in organization of the interdenominational Good Samaritan Mission of Asheville in 1911.

Campbell was distinguished as a leader in the civic, as well as religious, life of Asheville, and for years was widely regarded as its first citizen. Davidson College conferred upon him the degree of D.D. in 1893. His denomination honored him with the highest elective office at its disposal when its general assembly chose him as moderator in 1927. In 1930 he delivered the Sprunt Lectures at Union Seminary in Virginia; these appeared in book form during the same year under the title Freedom and Restraint.

On 8 Oct. 1885, Campbell married Sarah Montgomery Ruffner of Lexington, Va., who died in 1917. They were the parents of one son, William Henry Ruffner, (b. 17 Dec. 1890). Campbell's second marriage was to Julia Berryman of Shelbyville, Ky., and took place on 18 June 1919. To this union, Robert Fishburne, Jr., was born on 10 Jan. 1921. Campbell died in Asheville and was buried in the city's Riverside Cemetery. His portrait is in the First Presbyterian Church of Asheville.

C. Grier Davis, in Presbyterian Church in the U.S., Minutes, Synod of Appalachia (1947).

Campbell, Robert F. "Some aspects of the race problem in the South." Asheville [N.C.] Asheville printing company. 1899. https://archive.org/details/someaspectsofrac00camp (accessed May 13, 2013).