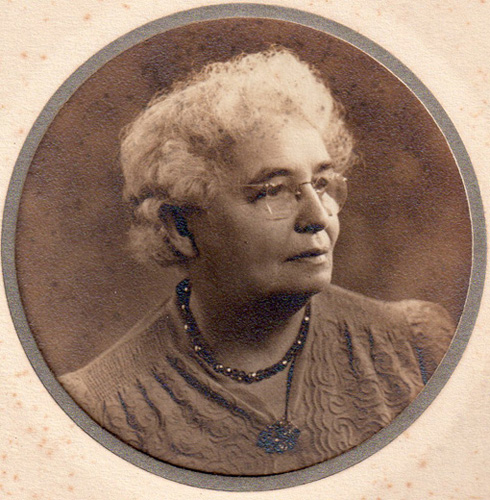 G. Hope Summerell Chamberlain, author, artist, clubwoman, house counselor at Duke University, and civic worker, was born in Salisbury. Although Mrs. Chamberlain did not use her first name, the first initial "G" is found on her early report cards from Augusta Female Seminary at Staunton, Va. She was the granddaughter of Elisha Mitchell, the geologist and botanist for whom Mount Mitchell was named. Her mother, Ellen H. Mitchell Summerell, came from an old New England line dating back to John Eliot, missionary to the Indians of Massachusetts. Dr. J. J. Summerell, Hope Summerell's father, who was of southeastern Virginia farming stock, became a physician in Rowan County. The Summerells had seven children, Hope being the youngest child and third daughter. Mrs. Summerell was responsible for her daughter's early education, but at the age of fourteen, Hope was sent to the academy in Hillsborough commonly know as Nash and Kollock's school. Continuing her formal training at the Augusta Female Seminary, she further pursued her primary interests in literature and languages. She then prepared to take the examinations for entrance to Wellesley College, but the illness and subsequent death of her mother required her to remain at home for four years to keep house for her father.

In 1891, Hope Summerell married Joseph Redington Chamberlain, the first professor of agriculture at the North Carolina State College of Agriculture and Mechanic Arts in Raleigh. A native of Kanona, N.Y., he graduated in the initial class in agricultural chemistry at Cornell. Teaching was not to be his life's work; he entered the fertilizer manufacturing business a year after his marriage. The Chamberlains' children were Mary Mitchell Chamberlain Moore, Jesse Mark, John Summerell, and Joseph Redington, Jr. In addition, they provided a home for two nephews and a niece.

During this time, Mrs. Chamberlain continued to cultivate her intellectual interests by studying and reading in German, French, and Italian. She served as food administrator of Wake County and as chairman of the Woman's Committee of the Wake County Council of Defense in World War I. Mr. Chamberlain died in 1926, and the depression took away his widow's financial security; therefore, in 1931, she became the adviser to students in Pegram Hall at Duke University, remaining there for seven years. After a year and a half in California, she retired in Chapel Hill.

When she was over fifty years old, Mrs. Chamberlain began her writing career. At least three of her books have been published: History of Wake County, North Carolina (1922); Old Days in Chapel Hill (1926), a life of Cornelia Phillips Spencer; and This Was Home (1938), reminiscences about southern home life in Salisbury during the nineteenth century. Each volume portrays some aspect of local North Carolina history, giving anecdotes concerning the area. This Was Home was originally planned as the first part of a trilogy; the second portion was to concern state politics in Raleigh, and the final segment would bring the chronicle up to date. The last two parts, "What's Done and Past" and "Oh Call Back Yesterday," were written but evidently never published. She left other manuscripts, "Life Story of Elisha Mitchell, D.D." and "Among Those Present: Fifty Years in the Old Home Town." She drew her own illustrations for her books. 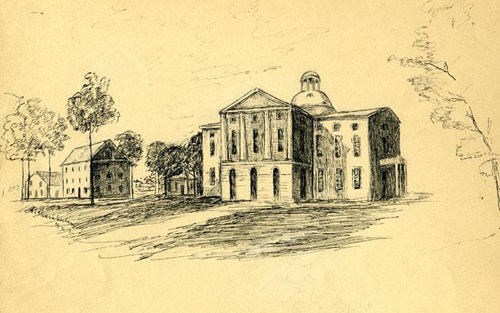 Mrs. Chamberlain's other accomplishments included active participation in civic and social work. She served as president of the Raleigh Woman's Club in 1918 and 1919 and chaired various departments in the organization. For many years she also gave a series of lectures for the club, which spanned the winter months and dealt primarily with literature. She worked as chairman of the legislative committee of the North Carolina Federation of Women's Clubs; one result of her lobbying was the establishment of the state Home and Industrial School for Girls in Samarcand, an institution for which she was appointed a member of the board of managers in 1918. Other associations in which she held membership were the North Carolina Society of the Colonial Dames of America, the Fortnightly Review Club in Raleigh, and the North Carolina Literary and Historical Association, of which she was a vice-president. Continuing the dedication to relief work she began during the First World War, Mrs. Chamberlain sewed for the Red Cross during World War II. In addition to her other interests, she enjoyed drawing, oil painting, hooking rugs, process-etching, and the study of folkways.

She received several honors, including a Litt.D. degree from The University of North Carolina in 1932, the North Carolina Distinguished Service Award for Women in 1952, and, in 1955, the Algernon Sidney Sullivan Award of the Southern Society, as an outstanding alumna of Mary Baldwin College (Augusta Female Seminary).

There does not seem to be a formal portrait of Mrs. Chamberlain. She died in Chapel Hill and was buried in Oakwood Cemetery in Raleigh.

Aunt Hope was my children's

Aunt Hope was my children's great-great-aunt. Their father, Howard B. Summerell Jr., inherited one of her paintings. My eldest, Howard R. (Ward) Summerell, had it restored and it's hanging in their new house, which was completed January 2015. In addition, we have one of the Bibles that had belonged to Aunt Hope's grandfather, The Rev. Dr. Elisha Mitchell, an early professor at Chapel Hill. The Bible, a photo of Dr. Mitchell and a photo of the mountain stream where Dr. Mitchell died are with my youngest, Mitchell Summerell. He has the photos of Dr. Mitchell and the mountain stream hanging in his front hall.

Thank you so much for visiting NCpedia and taking time to share your connection to Hope Summerell Chamberlain. We love to share these connections with other viewers!

Hope S. Chamberlain was my