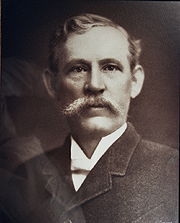 Francis Devereux Clarke, teacher of the deaf, was born in Raleigh. His father, William John Clarke, was a lawyer, a major in the Mexican War and a colonel in the Civil War, and president of the San Antonio and Mexican Gulf Railroad. His mother, Mary Ann Bayard Clarke, was a writer. At the age of seven, Clarke moved with his parents to San Antonio, Tex., where he studied with Oliver D. Cooke, a former teacher at the American School for the Deaf. He also studied at the Raleigh Academy and, from 1861 to 1863, at Davidson College. During the Civil War he served in the Confederate Navy on the Patrick Henry, the Tennessee, the Chicora, the Raleigh, the Richmond, and Torpedo Boat No. 3. Engaged in the battles of Mobile Bay and City Point, he rose to the rank of lieutenant.

From 1865 to 1867 he worked with his brother in lumber and grocery businesses in Raleigh and Johnston County. In 1867 he went to New York City, intending to go to China in the merchant marine. In New York, however, he met his former teacher, Oliver D. Cooke, who persuaded Clarke to join him at the New York Institution for the Deaf. He worked at the school from 1868 to 1872 and again from 1878 to 1885. Between stints at the school he earned an M.A. degree in 1873 and a degree in civil engineering in 1875 from Columbia University and worked as a civil engineer in New York and in North Carolina.

In 1885, Clarke became superintendent of the Arkansas Institute for the Deaf in Little Rock. After seven years he left Arkansas to direct the state School for the Deaf in Flint, Mich. His Methods Used in the Michigan School for the Deaf was published in 1908. He served for three years as chairman of the Conference of Principals and Superintendents of Schools for the Deaf and was president for three years of the Convention of Teachers of the Deaf. He was also a member of the American Academy of Science. After moving to Michigan, Clarke joined the Masons. At the time of his death he was serving as grand master of the Michigan Grand Lodge. He also belonged to the Sons of the American Revolution.

In Middletown, Conn., Clarke married Cecelia Laura Ransom on 24 Sept. 1873. She was a native of Michigan and a niece of former Michigan Governor Epaphroditus Ransom. They had no children. Clarke died in Flint and was buried in the Glenwood Cemetery mausoleum.

To whom it may concern:

To whom it may concern: