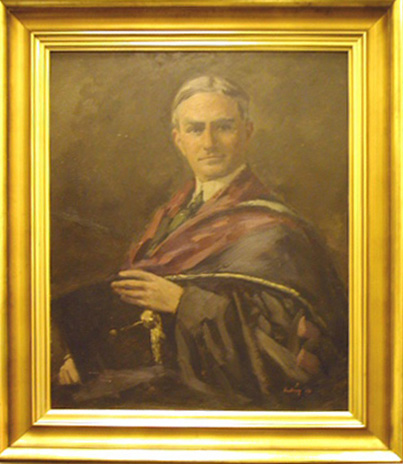 Philander Priestley Claxton, educator, was born in Bedford County, near Shelbyville, Tenn., the son of Joshua Calvin and Anne Elizabeth Jones Claxton. He traced his lineage to nineteenth-century settlers who immigrated from England, first to North Carolina and subsequently to Tennessee.

Claxton's early education was given in the public schools of Bedford County. He was graduated from the Turrentine Academy near his home in 1878 and that fall entered the University of Tennessee, Knoxville, from which he was graduated in 1882 with a B.A. degree. Five years later he earned his M.A. degree from the same university. He was a member of Phi Beta Kappa and Phi Delta Kappa.

Few men of the last hundred years in America have been as completely dedicated to educational expansion and progress as was Claxton. Upon graduation from the University of Tennessee, he went to North Carolina to teach in the public schools of Goldsboro (1882–83); in the following year he was superintendent of schools in Kinston. Then he went to Johns Hopkins University, Baltimore, Md. (1884–85), for special graduate study in educational methods and practices. He spent the following year traveling through Germany, analyzing the school systems and absorbing the cultural philosophy of the country's educational leadership. He visited England, Switzerland, Sweden, Denmark, and again Germany in 1896 and returned to Denmark for further observation in 1930.

Following his first visit abroad, Claxton served as superintendent of schools in Wilson (1886–87) and then went to a similar position in Asheville for six years (1887–93). After these eleven years of public school work in North Carolina, he became in 1893 instructor of pedagogy and German at North Carolina State Normal and Industrial School (now The University of North Carolina at Greensboro), an institution established two years previously. He was promoted in 1896 to professor of pedagogy and director of the Practice and Observation School and continued in that work until 1902.

In 1902, Claxton left North Carolina—and left it, because of his work toward better schools and more intelligent emphasis on teacher training a much more education-conscious state—to become professor of education at the University of Tennessee, Knoxville. Four years later he was named professor of secondary education and inspector of high schools there.

This expansive experience in modern educational programs made Claxton a logical choice for the post of U.S. Commissioner of Education, which he filled with great credit to himself and great value to the nation for ten years (1911–21). When he resigned as commissioner, he became provost of the University of Alabama at University (1921–23) and then returned to his first concern as superintendent of schools, Tulsa, Okla. (1923–29). His final professional position was the presidency of Austin Peay Normal School, Tenn. (1930–46), which he undertook at the age of sixty-eight, when most men retire. He was elected president emeritus of Austin Peay upon his retirement and retained that title until his death eleven years later.

Throughout his career, Claxton received some chiding for changing jobs so frequently; his studied reply was first an admission of a constantly "shifting base," with the explanation that his whole field was so new that many areas and institutions sought his innovative educational leadership.

He was editor of the North Carolina Journal of Education (1897–1901) and the Atlantic Educational Journal (1901–3). His professional affiliations were many and varied: he was a long-time member of the Southern Educational Board and for one year chief of the board's Bureau of Investigation and Information (1903); superintendent of the summer school at the University of the South, Sewanee, Tenn. (1902, 1911); director of the Playground Association of America and the Moral Education Board; chairman of the executive committee of the National Storytellers' League; vice-president of the American School Peace League and the School Citizenship League; member of the executive council of the National Education Association; member of the board of awards of American University, Washington, D.C. (1915–21); director and member of the executive committee of the Boy Scouts of America; chairman of the Committee on State Educational Bill, Tenn. (1907–9); delegate to the World Federation Education Associations; and member of the American Association of Administrative Superintendents; the National Student Forum on Paris Pact (1929–38); the Federal Board on Vocational Education (1911–21); the National Committee on Highway Engineering and Highway Transportation (1920–21); the National Society for the Scientific Study of Education; the American Association for the Advancement of Science; the Rockefeller Sanitary Commission; the Committee on Codification of State (Tennessee) School Laws (1909–11); the Committee on Revision of State (Oklahoma) School Laws (1927–29); and the American Geographical Society.

After retirement, Claxton continued to make his home in Clarksville; he died there at the age of ninety-five. Memorial services were held in Clarksville, and interment followed in Knoxville, Tenn.

Claxton was a pioneer in modern education. He was interested in educational administration only as it gave opportunity for improved teaching methods. Although he believed in methods, he stressed the content of instruction. He is credited with inaugurating and promoting the now familiar six-three-three plan: six years in elementary grades, three years in junior high school, and three years in senior high school, as preparation for college admission. He consistently stressed the responsibility of the federal government in education.

Claxton Hall at the University of Tennessee: http://tennesseeencyclopedia.net/image.php?rec=534