Richard Johnson Corbitt, founder and director of one of the few automotive manufacturing enterprises in the South, was born in Enfield. His father, Carr Bowers Corbitt, a Confederate veteran and native of Nansemond County, Va., was established as a merchant in Enfield but died when Richard was two years old.

Corbitt received early education at James R. Rodwell's school in Enfield. His study was terminated about ten years after his father's death, when his mother, Mary Lou Wilkins Corbitt, married Theophilus Stallings and moved with him to Macon in Warren County. The Stallings soon moved to Henderson in newly organized Vance County, and there Richard entered the employ of a local druggist, Edward L. Smith. A year and a half later, Corbitt engaged in the leaf tobacco business as an employee of J. P. Taylor. After a brief period of commercial study at the Oak Ridge Institute, he continued to represent the Taylor Tobacco Company in Henderson and Enfield.

In 1899, Corbitt established the Corbitt Buggy Company in Henderson, manufacturing buggies and surries. Advent of the horseless carriage did not end the enterprise: in 1905, Corbitt began conversion of his plant to the production of self-powered vehicles. A chain-driven horseless buggy drove off the assembly line in 1907, and by 1912 the Corbitt company was producing an identifiably modern automobile with a motor under a long hood, headlights, fenders, and pneumatic tires.

In 1913 the Corbitt company began to manufacture trucks, an enterprise that marked the company's major success in succeeding years. Custom-made trucks were manufactured for the army in World War I, and their use spread to twenty-three foreign countries. During the Second World War, over four thousand standard trucks were manufactured for the war effort at the Henderson plant. Furthermore, the company designed and manufactured specialty vehicles for military use both before and after the war. The T-33 military truck, designed and manufactured by the Corbitt company, was, upon production, the second largest truck in the world and the most versatile in range of power and speed. The truck weighed twenty-five tons and was powered by a radial, air-cooled aircraft engine. 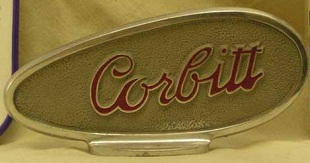 Because of material shortages, postwar production levels were held at a maximum of 150 diesel truck tractors per month. The company was the largest truck manufacturer in the South. Corbitt continued as general manager and chairman of the board of the corporation throughout the war and for some time thereafter. The business was sold in 1952 and later disbanded. An independent parts department remained in operation in Henderson, supplying Corbitt trucks still in use.

A member of the Methodist Episcopal church, Corbitt was active in church affairs and especially in the construction of the First Methodist Church at Henderson, where he served as chairman of the board of stewards. His civic efforts included many years' service as chairman of the Vance County Board of Education. He was a member of Masonic Lodge 229 and of the Sudan Temple of the Shrine.