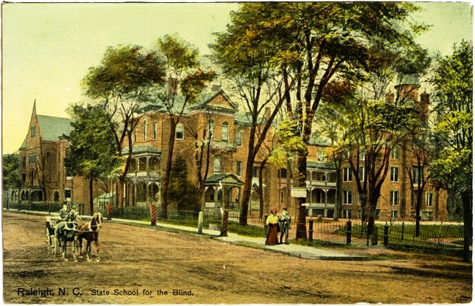 Dabney Cosby, architect and builder, who flourished in Virginia and North Carolina from the 1820s to his death, was born in Virginia. He resided in Raleigh from about 1840 until his death, and he is one of a small group of nineteenth-century North Carolina builders whose identity and works are known. Highly respected in his profession, he constructed a number of significant architectural monuments in Virginia and North Carolina during the early Victorian period. His specialty was roughcasting—that is, the application of a rough exterior wall surface composed of mortar and fine pebbles—and many of his buildings have this finish. During his long and extremely productive career, he worked in a variety of architectural styles, including the Federal, the Greek Revival, the Classical Revival, the Italianate Revival, and the medieval revivals. He is said to have worked with Thomas Jefferson in the construction of the original buildings at the University of Virginia in the 1820s. His earliest documented work is the construction of the Sussex County, Va., Courthouse in 1825. In addition to several additional Virginia courthouses, Cosby built a large number of plantation houses in Halifax County, Va., between 1835 and 1850. He constructed a good part of Union Theological Seminary at Hampden-Sydney, Va., before 1845 and churches in Petersburg and Smithfield, Va.

In 1840, Cosby purchased a lot in Raleigh on Dawson Street; he remained a Raleigh resident until his death, although his letters indicate that he traveled almost continuously during this period. His earliest documented work in North Carolina was the construction in 1840–42 of a house for the Mordecai family in Raleigh, perhaps the Mary Lane Mordecai House, now demolished. At the same time he built a house in Wake County for Mrs. Rebecca J. Williams. From 1845 to 1847, Cosby was working under architect A. J. Davis as the subcontractor in charge of masonry on the additions to Old East and Old West buildings at The University of North Carolina. His next known project was the construction of a brick house for Dr. Beverly Jones near Bethania, in Forsyth County, in 1847. Cosby's Dawson Street residence, a now-demolished Italianate Revival villa, is attributed to him and was probably built during this period. Between 1847 and 1850 he built the residence and schoolhouse for the North Carolina Deaf and Dumb Institute on Caswell Square in Raleigh. In 1850 he constructed the mammoth Yarborough Hotel on Fayetteville Street, Raleigh. He designed the Caswell County Courthouse, which was built, not by him, between 1858 and 1861. His last known projects, in 1855, were additional work to the Governor's Palace, which was an early nineteenth-century building on South Street, Raleigh, and the construction of a residence for Professor W. M. Wingate of Raleigh. On both projects he acted as superintendent under James Saintsing, a Raleigh architect and builder.

Many of Cosby's Virginia buildings have been preserved, but of his identified North Carolina building projects, only the additions to Old East and Old West in Chapel Hill and the Beverly Jones House are still standing. It is likely that many more Cosby buildings will be discovered in North Carolina as research continues.

Cosby and his wife, Frances, had many children, including at least three sons. Two of these, Dabney, Jr., and John, continued in their father's profession. Both worked in Raleigh on the Deaf and Dumb Institute and later moved to Halifax County, Va.

A Memorial to the General Assembly of North Carolina by Dabney and John W. Cosby (1851).