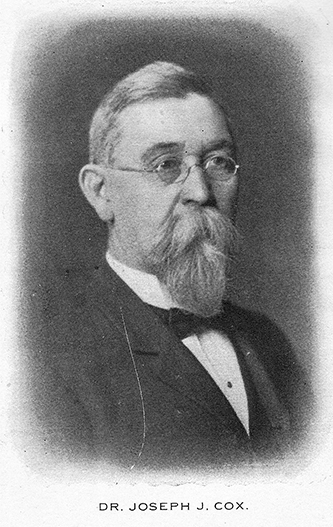 Joseph John Cox, physician and furniture manufacturer, was born on a farm near Rich Square, Northampton County, of English ancestry. His father was Jonathan E. Cox, a farmer who became superintendent of New Garden Boarding School just before the Civil War and maintained it successfully through that troubled era. His mother was Elizabeth Hare of Nansemond County, Va.

While his father served as superintendent and his mother as matron of the New Garden School, young Joseph Cox applied himself studiously to his courses of study. In 1866, Allen Jay, on his first religious visit to North Carolina, held a service at New Garden School for young people desirous of a better life; Cox was among those confessing Christ publicly. That experience affected his course of life and caused him to decide to become a physician. His parents feared that the strain would be too much for his physical strength, but in the fall of 1868 he entered Miami College at Cincinnati, Ohio, and a year later Jefferson Medical College at Philadelphia, from which he was graduated in March 1871.

In 1872, Cox married Mary Hollowell, who died in 1874. In 1876 he married Mary Dundas, daughter of John and Sarah Dundas, who, seeking a climate milder than Canada's, had settled near New Garden. Cox's son, Joseph D., became prominent in the business, civic, and religious life of High Point.

Cox's large country practice so taxed his strength that he moved to the growing town of High Point to avoid the exposure and weariness incidental to rural practice. His health greatly improved, and after a few years he gave up the practice of medicine to become secretary and treasurer of the Home Furniture Company, with which he was actively identified until his death. He was active in the religious, civic, business, and political life of High Point. At the time of his death he was superintendent of the Friends Bible School, an elder in his church, treasurer of the Foreign Mission Board, president of the board of trustees of Guilford College, director of the Commercial National Bank and member of the High Point School Board.