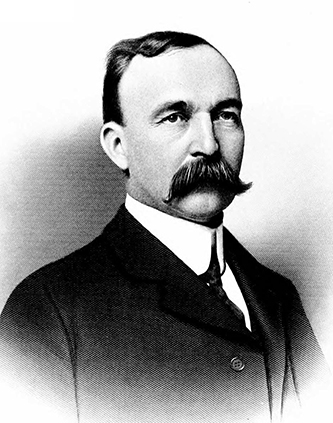 Jonathan Elwood Cox, banker and manufacturer, was born on his father's farm in Rich Square, Northampton County. He was the son of Jonathan Elliott and Elizabeth Hare Cox, who had met while students at New Garden Boarding School near Greensboro in Guilford County. The Cox family of Perquimans County and the Hares of Suffolk County, Va., were Quakers and had been in America since the early years of the eighteenth century. The elder Cox moved to Guilford County in 1859 to become superintendent of the New Garden School. His son attended classes there and then entered Earlham College, a Quaker college in Richmond, Ind. After two years at Earlham, he took a business course in Baltimore. Following a brief career as a rural schoolteacher and another as a traveling salesman of fruit trees, he settled in High Point in 1880 and remained there until his death. Shortly after his marriage in 1878, he entered into business with his father-in-law, William Henry Snow, and established the firm that eventually became the J. Elwood Cox Manufacturing Company, a firm engaged in manufacturing wooden shuttles and bobbins for the textile industry. The firm expanded rapidly and soon developed into a major producer for both domestic and foreign markets. After controlling the firm for nearly forty years, Cox incorporated it and turned it over to his nephew, Joseph D. Cox, who became its principal officer.

Cox contributed greatly to High Point's development from the rural community of seven hundred citizens he found when he moved there into one of the South's major industrial centers. In addition to his interests in manufacturing, he also achieved prominence in banking and established one of the principal financial institutions in High Point. In 1891 he founded the Commercial National Bank, remaining its president until it was forced to close in January 1932, at the height of the depression. He also served as president of the High Point Savings and Trust Company; as a director of the First National Bank of Thomasville, the Greensboro Loan and Trust Company, the Virginia Trust Company in Richmond, and the Jefferson Standard Life Insurance Company; and as an officer or director of numerous other manufacturing, commercial, and railroad companies in North Carolina and elsewhere. Active in the North Carolina State Bankers Association, he was also a member of the executive council of the American Bankers Association for fifteen years and in 1917 was elected president of the National Bank section of the organization. In 1923 he was elected treasurer of the national group for a term of two years. He was a director of the Southern Exposition Building and of the High Point Hotel for a number of years.

A loyal Quaker and an active member of the Central Friends Society, Cox was appointed in 1893 a trustee of Guilford College, the institution developed by the Society of Friends from the New Garden Boarding School, to which Cox's family had such close ties. He was chairman of the board of Guilford from 1903 until his death and chairman of the city school board in High Point for nineteen years. He served as a trustee of George Peabody College for Teachers in Nashville, Tenn., and was selected by James B. Duke, who with his brother, Benjamin N. Duke, had been Cox's schoolmates at New Garden School, as an original trustee of the Duke Endowment. 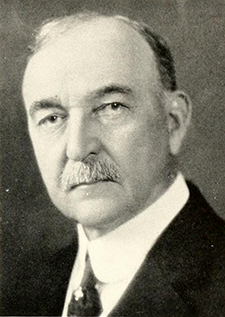 Cox ran as a Republican in the gubernatorial election of 1908 and through his unsuccessful campaign, substantially reduced the Democratic majority. He was appointed by Governor Cameron Morrison to the first state highway commission in 1921 and served as commissioner for the fifth district for ten years. He was also a representative from North Carolina on the War Finance Corporation.

On 23 Oct. 1878, Cox was married to Bertha Emily Snow, the daughter of William Henry Snow, a former captain in the Union army who had moved to North Carolina from Vermont after the Civil War. Snow successfully experimented with various woods for use in textile manufacturing equipment and was instrumental in organizing the Asheboro Railroad. The Coxes, who had been schoolmates at New Garden, had one daughter, Clara I., who with her mother spent the season at the family's winter home in St. Petersburg, Fla. In 1929, Cox built a handsome estate in the fashionable Emerywood section of High Point. He died after an illness of two months caused by a weak heart and was buried in the family mausoleum in Oakwood Memorial Park in High Point.