James Buchanan Duke, industrialist, the youngest of the three children of Washington and Artelia Roney Duke, was born on his father's farm located a few miles north of Durham in what was then Orange County. He received some education in an improvised school near his home, attended an academy in Durham for a while, and was sent briefly to New Garden School (later Guilford College) in 1872. Not inclined toward literary subjects, he later studied at the Eastman Business College in Poughkeepsie, N.Y., but he clearly learned most and fastest from his deep engrossment in the family's business of making and selling smoking tobacco.

Mastering every phase of the tobacco business from growing and harvesting the crop to selling the manufactured product in trips across the nation, James B. Duke became the hard-working, driving force behind the rise of W. Duke, Sons and Company to national importance in the tobacco industry in the 1880s. Soon after becoming president of the company and moving permanently to New York to supervise a branch factory there in 1884, he persuaded his partners to gamble on machine-made cigarettes, even though most of the older and larger cigarette producers insisted that the public preferred the hand-rolled variety. He negotiated a secret and favorable contract with the Bonsack Machine Company of Virginia for the use of the cigarette machine invented by James A. Bonsack. That fact plus the unceasing, hard work of Duke and his associates and the large amounts of money spent on an extensive and varied advertising campaign led to the rapid rise of the Duke firm in the late 1880s. 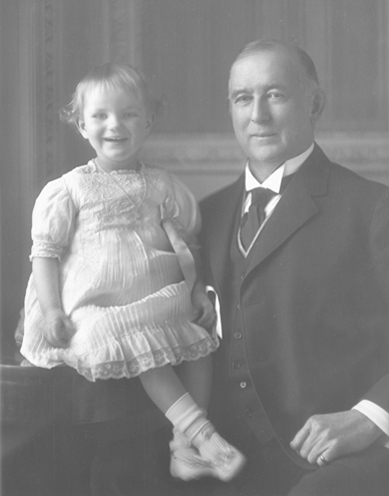 An "Old Guard Republican" and great admirer of President William McKinley and Senator Mark Hanna, Duke had good reason to fear President Theodore Roosevelt and his "trust busting." The federal government's antitrust action against the American Tobacco Company was launched in 1907 and culminated in 1911 when the Supreme Court ordered the dissolution of the giant combination. Except for the British-American Tobacco Company, which was headquartered in London, Duke dissociated himself from the tobacco industry after 1911.

Some years before that, he, his brother Benjamin N. Duke, and their partner George W. Watts had become interested in hydroelectric power as an outgrowth of their extensive investments in the textile industry in North Carolina. In 1905 they launched the Southern Power Company, with headquarters in Charlotte, and began to pour millions of dollars into a pioneering hydroelectric industry that played a key role in the industrialization of the Piedmont region of North Carolina and South Carolina and that ultimately became the Duke Power Company. After the dissolution of the old American Tobacco Company and especially after the outbreak of World War I, James B. Duke became increasingly interested in the power company. In 1919 he acquired a home in Charlotte where he frequently lived when not at his estate near Somerville, N.J., or his mansion on Fifth Avenue in New York, which he built in 1909–10.

Around 1915 Duke and his associates also acquired two major power resources on the Saguenay River in Canada's Quebec Province. In 1923–24, William States Lee, an engineer with whom Duke had become closely associated in 1904, supervised the building at one of the power sites of what has been described as the "world's largest hydrostation" at that time. Duke and Arthur Vining Davis of the Aluminum Company of America struck an agreement about the other power site in 1925 whereby Duke exchanged it for one-ninth of the stock ($17 million worth) of the reorganized Aluminum Company of America.

Unusually close to his older brother Benjamin, James B. Duke had long encouraged him to take the chief responsibility for various philanthropic causes supported by the Duke family from about 1890 on. Around 1915, however, when Ben Duke's long illness began, James B. Duke began to engage more directly in philanthropic support for Trinity College in Durham and other causes supported by the Methodist church. About the same time he began to plan for a philanthropic foundation to serve Trinity College and other charitable institutions in the Carolinas and to be based in large part on a substantial portion of his holdings in the electric power company. Duke first informed Trinity College's President William Preston Few of those plans in 1919. Though encouraged by Few as well as by Ben Duke, James B. Duke refrained from acting on his philanthropic plans until he could win from North Carolina's Corporation Commission approval of increased rates for the power company to provide what he regarded as more adequate dividends on its stock.

In 1921 Few proposed to James B. Duke that a university be organized around Trinity College and that as a memorial to Washington Duke, whose gifts had brought Trinity College to Durham in 1892, the enlarged institution be named Duke University. Duke refused to sign the memorandum that Few submitted to him in 1921 but, nevertheless, generally approved of Few's idea. By December 1924 Duke was finally ready to sign and announce the indenture creating the Duke Endowment. Providing securities worth $40 million for the endowment (with an additional $67 million to come from his will), he specified that fifteen trustees were to distribute the annual income from the fund among educational institutions, hospitals, and orphanages in the two Carolinas and the Methodist church in North Carolina. In addition to Duke University, the other educational institutions to be supported were Davidson College, Furman University, and Johnson C. Smith University.

Duke selected the architect to design the new buildings of Duke University, Horace Trumbauer of Philadelphia, and took great pleasure in helping to choose the stone from a quarry near Hillsborough that would be used; he also participated in various decisions about the extensive new campus to be built and the rebuilding of the old Trinity campus. Before the work was barely underway, however, he became ill at his home in Newport, R.I., and then died in his New York home of what was diagnosed as pernicious anemia. He was buried in the Memorial Chapel of Duke University Chapel.

Duke married a divorcee, Mrs. Lillian McCredy, in September 1904, but the marriage was ended by his successful suit for divorce in 1906. In July 1907, he married a widow from Atlanta, Ga., Mrs. Walker P. Inman (née Nanaline Holt of Macon, Ga.). Their daughter Doris was born on 12 Nov. 1912. Portraits of Duke are in the libraries of both campuses of Duke University and in the main foyer of Duke Hospital.

James B. Duke, History Beneath Our Feet, Museum of Durham History: http://museumofdurhamhistory.org/beneathourfeet/people/DukeBJames