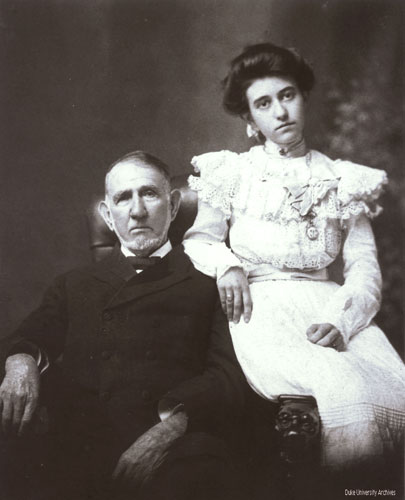 Washington Duke, industrialist, the eighth of the ten children of Taylor and Dicey Jones Duke, was born on his father's farm on the Little River in what was then Orange County. Raised accustomed to hard work, Washington Duke became what his father had been: a diligent yeoman farmer who had virtually no formal education but who was well respected in a community where the great majority of people were in similar circumstances. By the 1850s, Duke owned some three hundred acres situated about four miles north of the new village known as Durham's Depot or Station (later Durham) after the North Carolina Railroad reached there in 1854.

In 1842 Duke married Mary Caroline Clinton and the couple had two sons, Sidney Taylor (b. 1844) and Brodie Leonidas (b. 1846). After his first wife's death in 1847, he married Artelia Roney of Alamance County in 1852. A daughter, Mary Elizabeth, was born a year later followed by two sons, Benjamin Newton (b. 1855) and James Buchanan (b. 1856). In 1858 Sidney Duke died of typhoid fever. Within a short time Artelia Roney Duke also died of the same disease, and Washington Duke, with the help of his maiden sister and sisters-in-law, had the responsibility of caring for his four young children.

Outside of his family, the most important institution for Duke and the one that exerted the greatest influence on him all his life was the Methodist church. Converted at an early age in Mount Bethel Church in the village of Balltown (now Bahama), he later belonged to Mount Hebron Church, which his oldest brother, William J. Duke, had been instrumental in establishing and which was later renamed Duke's Chapel in William's honor. 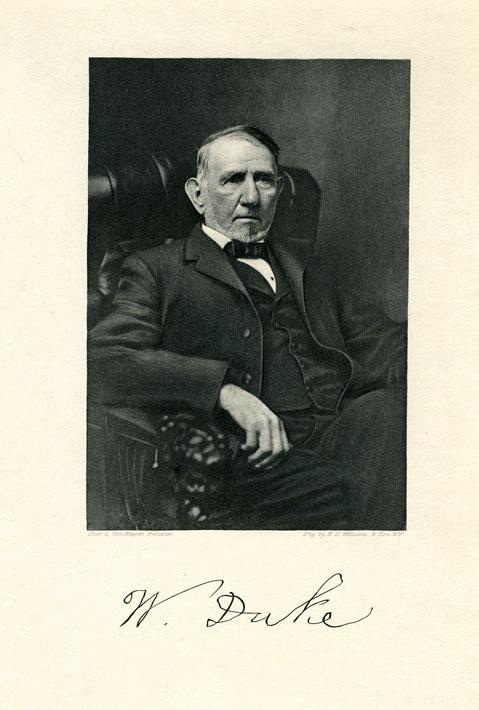 Though a Democrat, Duke, like so many North Carolinians, opposed secession in 1861. Two years later, however, he was called to arms when the Confederacy in late 1863 moved to draft men up to forty-five years of age, even those with motherless children. Entering the Confederate service in April 1864, he was soon assigned to duty aboard a Confederate receiving ship in Charleston, S.C. Later in the year he was sent to join the James River squadron near Richmond, Va.; when Richmond fell to Union forces in early April 1865, he was taken prisoner. Paroled some weeks later, he was taken by ship to New Bern, N.C., and from there he walked the 130 or so miles to his home.

Whereas before the Civil War Duke was remarkably typical of the great majority of white southerners, he became distinctly atypical afterward. As soon as the Republican party formally appeared in North Carolina in 1868, he joined it, probably because he believed that the Southern Democrats had been primarily responsible for secession and the war. For the remainder of his life, he never faltered in his loyalty to the Republican party at all levels.

Economically, Duke was atypical in the decision that he made soon after the war: rather than turning back to the land for his livelihood, as did most southerners, he launched his family on the small-scale manufacture by hand of smoking tobacco made of the new bright leaf variety that was being increasingly produced in the area. Beginning as a wagon-borne peddler of the family's brand, "Pro Bono Publico," Duke became, as the business slowly prospered, a salesman who "drummed the trade" across the nation. In 1874 he moved his family and business into Durham. In 1878, when George W. Watts of Baltimore purchased a one-fifth interest in the enterprise for $14,000, the firm of W. Duke, Sons and Company was formally launched. It consisted of Washington Duke, his three sons Brodie, Ben, and James, and George Watts. The firm's subsequent growth in the 1880s to preeminence in the cigarette industry was not, however, the work of Washington Duke so much as it was that of his youngest son, James B. Duke. In 1880 when the elder Duke was sixty, he virtually retired from the tobacco business and devoted himself primarily to the affairs of his family, the Methodist church, and the Republican party. 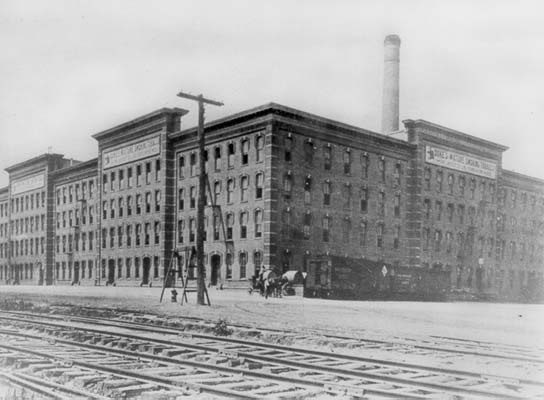 Another aspect of Duke's atypicality in the postwar South was that he and his family began to grow rich, modestly so in the 1880s and more markedly in the next decade. Even more unusual, they began to give money regularly and systematically for various philanthropic causes, particularly but not exclusively Methodist ones, in an era when there were no income taxes to encourage such giving for the purpose of gaining tax deductions. Aided and encouraged in philanthropy by his son Ben, Washington Duke in 1890 offered to give Trinity College, the North Carolina Methodists' institution for the higher education of men, $85,000 to move from rural Randolph County to Durham. After the offer was accepted, he headed the building committee in Durham and became the foremost supporter of the college. In 1896 he offered Trinity $100,000 for endowment on the condition that women students be admitted, an offer that the college promptly accepted. In 1898 and 1900 he gave similar amounts to Trinity.

Although Trinity College headed the list of Duke's philanthropies, he also gave to many other institutions in the state—including those of black North Carolinians, with whom Washington Duke, as a Republican, had friendly ties even in the era of Jim Crow laws and black disfranchisement.

Always a taciturn, dignified man, with a dry sense of humor, Duke lived to be nearly eighty-five and in his later years was widely and affectionately referred to around Durham as the "old gentleman" and "Uncle Wash." He was buried in the Memorial Chapel of the Duke University Chapel in Durham. His portraits are in libraries on both campuses of Duke University.