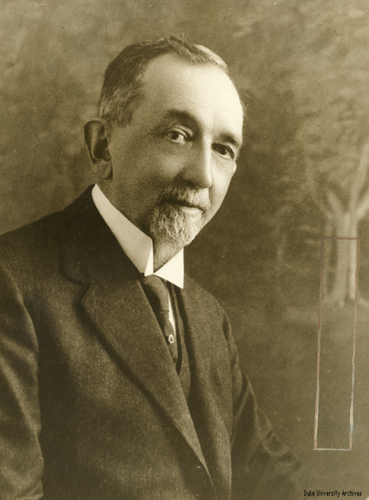 Benjamin Newton Duke, industrialist, the son of Washington and Artelia Roney Duke, was born in the modest farmhouse built by his father in 1852. Except for a brief period toward the end of the Civil War, when his father fought for the Confederacy and he, his sister, and his brother lived with their Roney grandparents in Alamance County, Ben Duke grew up on the family farm a few miles north of Durham in what was then Orange County. Often sickly as a child, he developed an especially close relationship with his more robust younger brother, James B. Duke. He received some improvised schooling as a child and after the war attended sessions at an academy in Durham. In 1871 he and his sister Mary enrolled for one year at the New Garden School (later Guilford College) near Greensboro.

Duke was associated with his father, brother, and sister in the home manufacture of smoking tobacco, a business that Washington Duke began soon after the Civil War ended. Ben Duke became a partner when the business, which had been moved to Durham in 1874, was formally organized as W. Duke, Sons and Company in 1878. In the subsequent rise of the company to preeminence in the tobacco industry, he played a key role, though one that was secondary to that of his brother James. When W. Duke, Sons and Company became part of the great combination known as the American Tobacco Company in 1890, he became a director and also served for some years as treasurer of the vast company.

Maintaining a home in Durham even after he acquired a mansion on New York's Fifth Avenue early in the twentieth century, Duke took the leading role in involving his family in the textile industry when he brought William E. Erwin to Durham in 1892 to launch the Erwin Mill. That enterprise, which ultimately had branches in Duke (later Erwin) and Cooleemee, grew to be one of North Carolina's major textile producers. The Dukes also invested largely in other textile plants in the state. In addition to serving for many years as the president of the Erwin Mills, Ben Duke also served as president of the Fidelity Bank and the Citizens National Bank in Durham, of the Durham and Southern Railway Company, and of other North Carolina enterprises in which the Dukes and their partner, George W. Watts, held substantial investments. As an outgrowth of the family's interests in textile manufacturing and the need for economical power, Ben and James B. Duke became interested in hydroelectric power around the turn of the century and in 1905 launched the Southern Power Company, headquartered in Charlotte. This pioneering venture, which played a major role in the rapid industrialization of the Piedmont region of the two Carolinas, later became the Duke Power Company. 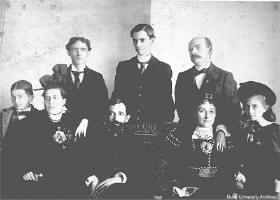 Duke was an able businessman but not the business genius that his younger brother proved to be. In fact, throughout his life he was less single-minded about business than his brother and took the major role in conducting the Duke family's philanthropies from the late 1880s on. While his aged father put up the money to bring Trinity College to Durham in 1890–92, Ben Duke accepted the burdensome responsibility of sitting on the executive committee of the college's board of trustees and of saving the institution from bankruptcy after it opened in Durham. He became the primary benefactor of Trinity College and, as the main link between the Duke family and the college, the principal reliance of presidents John F. Crowell, John C. Kilgo, and William Preston Few. Keenly interested in various other institutions such as the orphan asylum at Oxford, the Methodist Conferences of North Carolina, and various schools and churches of both white and black North Carolinians, he set a large part of the philanthropic pattern that would become embodied for posterity in the Duke Endowment, established by his brother in December 1924.

During the last fifteen or so years of his life, Duke suffered from intermittent illness that gradually made him a semi-invalid. Having earlier given large portions of his wealth to his wife and children, he disbursed nearly $3 million during the last four years of his life to a large number of schools and colleges in the South, especially in the two Carolinas.

On 21 Feb. 1877 he married Sarah Pearson Angier. Their first child, George Washington Duke, died at the age of two. Two other children were born to the couple, Angier Buchanan Duke on 8 Dec. 1884 and Mary Lillian Duke on 16 Nov. 1887. In 1915 Angier Duke married Cordelia Biddle of Philadelphia and Mary Duke married Cordelia's brother, Anthony J. Drexel Biddle, Jr. The subsequent death of Angier Duke in a boating accident in 1923 was a great blow to Ben Duke during his last years. He was buried in the Memorial Chapel of the Duke University Chapel, Durham. His portraits hang in libraries on both campuses of Duke University.