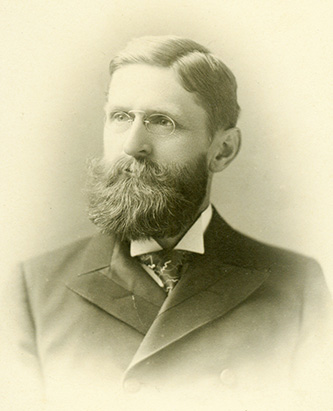 John Franklin Crowell, educator, economist, and journalist, was president of Trinity College from 1887 to 1894 and directed its move in 1892 from Randolph County to Durham. He was born in York, Pa., one of at least five children of Daniel and Sarah Ann Jacobs Craul. He attended Dartmouth College for a year and changed his name to Crowell about the time he left there. He transferred to Yale, where he was graduated with the B.A. degree in 1883. After serving as principal of Schuylkill Seminary at Reading, Pa., in 1883–84, he returned to Yale for a year in the Divinity School and another year in the Graduate School as Larned scholar in philosophy. He returned for the year 1886–87 to Schuylkill Seminary, which had been moved from Reading to Fredericksburg. This move from an urban environment to a rural one Crowell considered detrimental to the school, and he would later achieve the reverse for Trinity College.

Crowell married Laura Kistler Getz, the daughter of a prominent Reading manufacturer, in 1887. She died the following year, and in 1891 he married Caroline Haas Pascoe. No children were born of either marriage. An inheritance from his first wife largely financed the construction in her memory of the Crowell Science Hall on the Trinity campus in Durham.

A group of farsighted members of the Trinity board of trustees saw in Crowell the type of progressive educator and administrator that was needed to lift the college out of stagnation. There was opposition to his appointment, because he was northern and of another faith, but the opposition was overcome by arguments that the tenets of his church, the Evangelical, were similar to those of the Methodist church and that he had developed a special interest in the South.

When Crowell reached Trinity College and saw how meager its resources were, he was tempted to resign at once. Instead, he immediately announced changes in the curriculum. He gradually upgraded the faculty and improved the educational facilities of the college. He taught each year as well as administering the college and supervising the construction of its new campus and the move to Durham. A man of vision and tremendous energy, he also traveled widely over the state, speaking and preaching to different groups. In this way and through publication he sought to expand the reputation and influence of the college and to acquire students and financial support for it. He supervised the setting up of academies and gave advice to those already in operation. He dreamed of Trinity as a university, with the other Methodist colleges in the state in affiliation and preparatory schools serving as feeders for the whole system. One of Crowell's many innovations at Trinity was the introduction of intercollegiate football. The owners of the college, the two North Carolina conferences of the Methodist Episcopal Church, South, came to oppose this and some other actions of his so strongly that he resigned.

Crowell's second career as an economist and statistician in Washington and New York was a distinguished one. He was also, from 1906 to 1915, associate editor of the Wall Street Journal. He retired in 1925 after serving six years as director of the World Market Institute of New York. During his retirement years, much of his time was devoted to lecturing and writing, and his published works include studies on college training, taxation, industry, and commerce. His Personal Recollections of Trinity College, North Carolina, 1887–1894, is a Duke University Centennial Publication.

Before his death, Crowell became a member of the First Church of Christ, Scientist in Boston. He died in East Orange, N.J., and was buried in Red Mount Church cemetery, near his boyhood home. A portrait hangs in the William R. Perkins Library of Duke University.