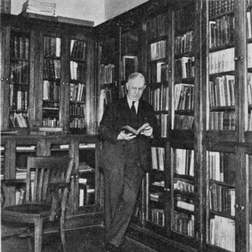 Tom Peete Cross, scholar, folklorist, and friend of Tar Heel drama, was born in Nansemond County, Va. He was the son of Thomas Hardy and Eleanor Elizabeth Wright Cross and grandson of Hardy and Martha Peete Cross. His father was a planter.

Cross maintained a lifelong interest in North Carolina folklore and folk drama. With Cross as a sponsor, a dramatic association was formed that year at the university, and a play, reportedly the first in several decades at the school, was performed and taken on tour to several towns in the state. The dramatic association continued to function after Cross left the university; and in 1918, Professor Frederick Koch, a graduate student of drama at Harvard when Cross was there, arrived in Chapel Hill and formed the Carolina Playmakers. Articles by Cross about Tar Heel folklore influenced the subject matter of the Playmakers' first performances. In 1909 he had published an article about a Northampton County witch in the Journal of American Folklore, and in 1919 his article "Witchcraft in North Carolina" appeared in Studies in Philology, a scholarly journal published at The University of North Carolina. The first native folkplay produced by the Carolina Playmakers (1919) was Elizabeth Lay's "When Witches Ride," about a Northampton County witch. In 1922, Cross was asked by Professor Koch to write an appendix on the dialect of the North Carolina region for the first published collection of Carolina folkplays.

During his later career, Cross wrote articles for the Review Celtique of Paris and a book about the Celts, Harper and Bard (1931); he was a fellow of the American Irish Historical Society and of the American Council of the Irish Texts Society. He was a member from 1913 to 1945 of the English faculty of the University of Chicago, teaching English, Celtic, and comparative literature. Also an Arthurian scholar, he wrote special articles on folklore and superstition for the Chicago Herald. He was the author, with C. H. Slover, of Ancient Irish Tales (1933), but his best-known publication was the Motif-Index of Early Irish Folk-Literature (1952), which he spent twenty-five years compiling. He belonged to a number of professional and fraternal organizations; his religious affiliation was with the Methodist church.

Tom Peete Cross. Image courtesy of the University of Chicago. Available from http://photoarchive.lib.uchicago.edu/db.xqy?show=browse1.xml|411 (accessed May 9, 2013).