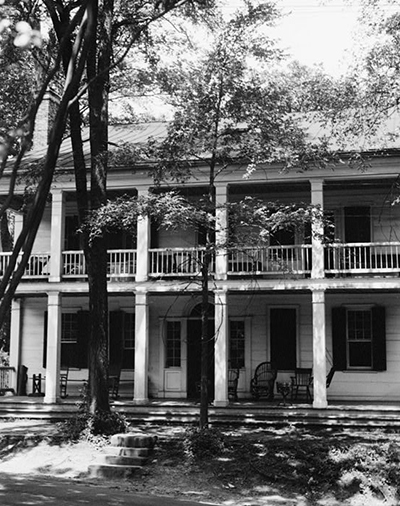 Dolphin Alston Davis, banker, educator, and local official, was born at Cool Spring Inn, Fayetteville, of English and Scottish ancestry. His father was Dolphin Davis (1759–1818), a native of Halifax County, Va., who moved to Cumberland County before 1784. In 1789 he opened a tavern called Cool Spring Inn. A soldier of the American Revolution, he had taken part in the Battle of Kings Mountain. His mother was Ann Stevenson, a daughter of one of the Scottish emigrants who went to the Cape Fear valley shortly after the Battle of Culloden in 1746. Both parents were devout people and his father was long a ruling elder of the Presbyterian church.

When his father died in 1818, Davis was hired as a clerk in the Fayetteville branch of the Bank of the United States. Although his advantages in education were limited, he had enjoyed a period of instruction in the Fayetteville Male Academy under the Reverend James L. Turner and the Reverend Colin McIver. The excellence of his style as seen in his letters and business papers shows that he made good use of his time while in school. After working seven years in the bank, he purchased a farm near Fayetteville and spent twelve years in agricultural pursuits. In 1837, he moved with his wife and two children to Salisbury to be cashier of the Salisbury branch of the Bank of Cape Fear, a position he held until after the Civil War. For several years before his removal to Salisbury he had been magistrate and financial agent of Cumberland County. He was chosen for the same position in Rowan County. His ability, accuracy, and fidelity soon won the confidence of his fellow citizens.

A year after his arrival in Salisbury, Davis was named a director of the Salisbury Female Academy and was on the building committee that in 1839 erected the school behind the Presbyterian church that came to be known as the Wren Building. In 1839 he was named a director of the Salisbury Cotton Factory that later served as a Confederate prison. Also in 1839 he was elected president of the Temperance Convention that met in the Methodist church to form a temperance society in Salisbury. He was a stockholder in the Salisbury and Taylorsville Plank Road Company, a director of the North Carolina Railroad, chairman of the Special Court, and a warden of the poor. A friend and promoter of schools and higher education, he was a founder and trustee of the Salisbury Female Seminary in 1855 and served as chairman of the board of superintendents for the Rowan County common schools from 1854 to 1866. He was also a trustee of Davidson College, from which all four of his sons were graduated.

For a man who was three times elected mayor of Salisbury (1849, 1855, 1856) and twice was chairman of the county commissioners (1868, 1869), it seems unusual that Davis had no broad political ambition nor did he enter into the hustings to any marked degree. It was because of his great financial acumen and innate honesty that he was chosen to lead the city and county government. Because of his prudence the finances of Rowan County were in good condition, and during his time in office Rowan and Salisbury were free of debt. He was considered a model businessman, and his religious, moral, and social character marked him as a leader. He was elected an elder in the First Presbyterian Church in 1839 and served in that office for forty-two years. He represented his church in the presbytery, the synod, and the general assembly. He was clerk and treasurer of the session, and for thirty years, as a trustee, he served on the executive and financial committees of Davidson College.

After the Bank of Cape Fear closed, Davis opened a private banking house, which he operated successfully until his death. Afterward his son, O. D. Davis, formed a partnership with Samuel H. Wiley; they operated the only bank in Salisbury until it was sold to the Atlantic Bank and Trust Company of Greensboro in 1926. Davis was buried in the old English Cemetery, Salisbury.

By his several marriages Davis had nine sons, two of whom became Presbyterian ministers and another a ruling elder.

Dolphin Davis, "Memorandum of My Childrens' Ages" (MS in the author's possession).