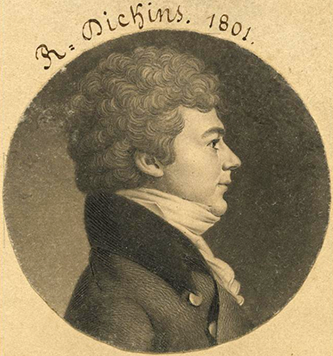 Asbury Dickins, bookseller, publisher, and government career man, was born in Halifax County, the son of John and Elizabeth Yancey Dickins. John Dickins played an important part in the formation and early growth of the Methodist Episcopal church in the United States, and served appointments as a minister in North Carolina in the 1780s. In 1789 he assisted with the organization of the Methodist Book Concern and became the church's first book agent, moving his family to Philadelphia where he set up publishing offices. When his father died in 1798, Asbury Dickins, then eighteen years old, and his mother carried on the publishing business for some months under considerable financial strain. In 1800 they moved the book shop to 25 North Second Street in Philadelphia. Late that year Dickins and John Dennie began to publish The Port Folio, a political and literary weekly that compared favorably with the best magazines in England.

In his early years Dickins failed to follow in the religious footsteps of his parents, causing great concern to his mother and her contemporaries, particularly Bishop Francis Asbury, for whom he was named. In 1801 he became involved in some incident serious enough to make him leave the country. He fled to England, where he married Lillias Arnot, a Scottish woman of noble descent. For a number of years he was chancellor of the U.S. consulate in London. Through connections of his mother's family he returned to the United States to serve as a clerk in the Treasury Department under Secretary William H. Crawford from 1816 to 1833. From 1833 to 1836 he was chief clerk in the State Department, and in 1836 he was elected secretary of the U.S. Senate, an office he held until the advent of the Lincoln administration.

Dickins and his wife were the parents of nine children. A son, Francis Asbury Dickins, in 1839 married Margaret Randolph, daughter of Thomas Mann Randolph of Tuckahoe, Goochland County, Va.