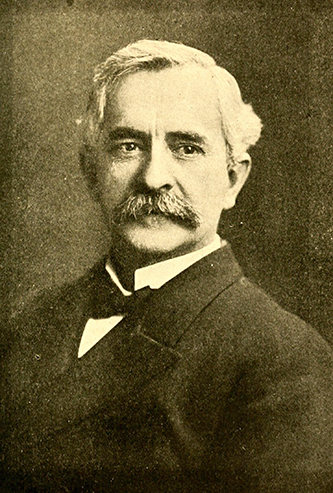 Amzi Clarence Dixon, Baptist pastor and evangelist for more than fifty years, was born in Shelby, the son of Amanda Elvira McAfee and Thomas Dixon, Jr., a pioneer preacher among the rural people of North Carolina and South Carolina. He was baptized when he was twelve years old along with ninety-seven others in a revival led by his father. Educated at the Shelby Academy from the age of six, he entered Wake Forest College in 1869. He planned to become a lawyer but, while on vacation between his junior and senior years, his father sent him to New Prospect Baptist Church to inform the congregation that due to a revival still in progress the elder Dixon could not keep the appointment. Young Dixon was invited to lead the meeting, which he did, and for two more weeks continued to attend the church daily. A classmate observed the change when Dixon returned to college and wrote in retrospect: "It was not until his last year at college that he definitely heard and heeded the call of God to preach the Gospel. But, his decision once made, he entered into his new work as he played baseball, whole-heartedly, with every power of heart, mind, soul, and body."

After his graduation from Wake Forest College Dixon spent the summer of 1874 preaching with his father. In the fall he accepted the pastorate of Mount Olive Baptist Church, Wayne County, and Bear Marsh Baptist Church, Duplin County. He was ordained at Bear Marsh in 1875. In September 1875 he enrolled at the Baptist Theological Seminary, Greenville, S.C. In the spring of 1876, he received a pressing invitation to come and preach to the Baptists in Chapel Hill that summer. His evangelistic gifts resulted in many conversions of University of North Carolina students and townspeople alike.

In 1880 Dixon resigned his pastorate in Chapel Hill and accepted a call to the Asheville First Baptist Church; on the last day of June he married Susan Mary Faison at her home near Warsaw. In 1882, at the age of twenty-eight, he was offered the presidency of his alma mater, Wake Forest College. Dixon declined the position in order to accept the pastorate of the Immanuel Baptist Church in Baltimore, Md. After serving that church and assisting measurably in the growth of Baptists in and around Baltimore, Dixon accepted the pastorate of the Hanson Place Baptist Church, Brooklyn, N.Y., where he remained from 1890 to 1901.

Dixon's work in Brooklyn was marked by evangelistic zeal, support of the temperance cause, and frequent controversy over liberal teachings, especially evolution. In 1893 he was associated for one month with D. G. Moody, preaching to the throngs that attended the Chicago World's Fair. In 1901 Dixon left Brooklyn to begin his ministry at Ruggles Street Baptist Church, Boston, Mass., which continued until October 1906 when he became pastor of the Moody Church, Chicago, Ill. He left the United States to accept the pastorate of Spurgeon's Tabernacle, London, England, where he served from 1911 until 1919 during the trying days of World War I.

For several months following his London ministry, Dixon was engaged in Bible conferences, in evangelistic meetings, and in writing and preaching in support of the Fundamentalist movement. While attending a missionary conference in China in 1922, his wife died after a brief illness. Returning to America, he accepted the pastorate of the recently organized University Baptist Church in Baltimore. To this new work he gave the closing years of his ministry from 1922 to 1925.

From his earliest days in Baltimore, Dixon had begun to appreciate the power of the printed word to amplify his spoken message. In each of his pastorates he devoted much time and thought to issuing a church paper. In Baltimore and Brooklyn it took the form of a weekly leaflet containing his sermons. The Gospel Worker at Immanuel Church developed into Work and Worship. In Brooklyn he published a weekly magazine entitled Gospel, which was devoted to biblical exposition and illustration. Through the last years at Hanson Place a sermon was printed every week in a new leaflet entitled The Living Word. In Boston, two or three sermons at a time were published monthly in booklet form. At the beginning of 1908 Dixon purchased a column in the Saturday issue of The Chicago Daily News as a vehicle for carrying the Gospel message to nonchurchgoers. He also wrote many books and pamphlets in support of the Gospel and Fundamentalist movements.

Dixon and his wife Mary had five children: Clarence Howard, Mary Faison, Abner Faison, Clara, and Grace. On 25 Jan. 1924, Dixon married his second wife and future biographer, Helen Cadbury Alexander, widow of Charles M. Alexander, a widely known evangelistic singer in London, England. Less than a year and a half later Dixon died at Union Memorial Hospital in Baltimore. After funeral services in the University Baptist Church he was buried at Druid Ridge, ten miles from Baltimore.