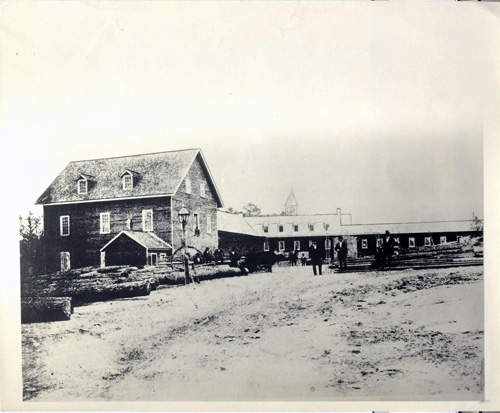 Henry A. Donaldson, merchant and builder of cotton mills, appears in Edenton, Chowan County, in 1807 when he married Elizabeth McDonald whose father apparently was a merchant in that county. Donaldson, described in a wedding notice as a merchant, seems not to have been from eastern North Carolina himself; one source suggests that he was from Providence, R.I., though a search of records in that state reveals nothing about such a person. In 1812 Donaldson was clerk of the Chowan County Court, whereas in 1816, with Joel Battle, Peter Evans, and John Hogun, he began buying land around the Falls of Tar River, the present site of Rocky Mount. The next year Hogun sold his share to Battle, and in 1816 or 1817 a stone mill was constructed at the falls and expanded in 1819. By 1820 the three partners owned the entire area, and the cotton mill was in full operation. In that year they received a license to build a dam at the falls. Dissension among the partners in the early 1820s led to Donaldson's buying Evans's interest in 1821 and then, in 1828, selling his share to Battle. The Battle family continued to control the mill for a number of years. Donaldson moved to Fayetteville and opened the Fayetteville Mill on Cross Creek which he purchased from William L. McNeill. In 1830, however, he was living in Wake 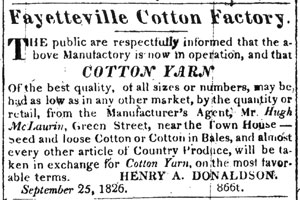 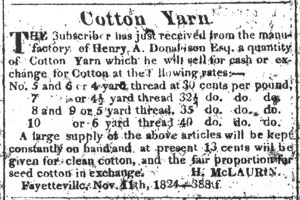 Forest Township, Wake County, when his family was recorded in the census as consisting of six males (presumably five sons and himself) and four females (probably his wife and three daughters); he also owned twenty-seven slaves. He is said to have used slave labor in the Fayetteville Mill. In time financial problems made it necessary for him to sell his interests in the state. In 1833 he moved to Mobile, Ala., where he reportedly attempted but failed to build a mill.

From Mobile on 19 Apr. 1841 Donaldson wrote to Calvin Jones, whom he undoubtedly had known in Wake Forest, that he was working for the state bank and had planted a scuppernong vineyard. The 1842 Mobile city directory lists him as a note clerk and note teller in the state bank, whereas the 1856 directory identifies Henry Donaldson as city treasurer (although this may have been the son of Henry A.). The 1850 census for Mobile lists a clerk of this name, his wife Eliza, and two sons, Henry and James, age twenty-four and twenty-one, respectively, all born in North Carolina.