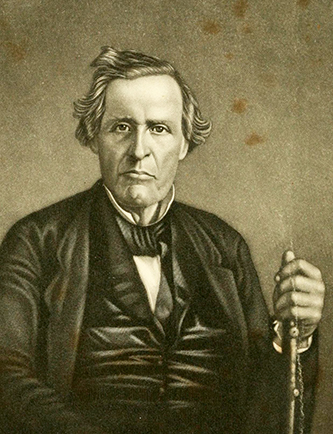 Robert Donnell, Presbyterian minister and evangelist, was born in Guilford County, the son of William Donnell and Mary Bell. His grandfather, Robert Donnell, of Scottish descent, had immigrated to Pennsylvania with Scotch-Irish colonists and had lived for some time in York County; from there he moved to the north bank of North Buffalo Creek in Piedmont North Carolina, where he and other members of the Nottingham Company had bought extensive tracts of land about 1850. During Donnell's childhood his parents moved to Tennessee, where his father died when Robert was fourteen. Under his mother's guidance, his primary education consisted chiefly of reading the Bible and religious books. A popular lad, he was known for his height, strength, feats of hunting and rail-splitting, and use of tools.

A camp meeting in the Cumberland revival deepened Donnell's inherited religious conviction, and in 1801 he decided to be a minister. Unable to leave farming in order to get a better education, he held prayer meetings. Under jurisdiction of the council formed in 1805 by workers in the revival, he rode circuits over a wide territory between the Cumberland and Ohio rivers and then undertook pioneer preaching in northern Alabama. He was ordained in 1813 by the independent Cumberland Presbytery, formed in 1810 as successor to the council. Helping its expansion into the Cumberland Presbyterian church, he was one of the framers of its 1814 confession. The sect attained national notice when an article he wrote with Finis Ewing in 1813 was published in Woodward's 1814 edition of Charles Buck's Theological Dictionary.

Continuing to study, travel, and preach, Donnell was sometimes away from home for months, working in Tennessee, Kentucky, Pennsylvania, North Carolina, and Alabama. For half a century he averaged one camp meeting a month, preaching once, twice, or more each day. His imposing personality, powerful sermons, convincing oratory, and emotional appeals often resulted in tears and shouts from his inspired listeners. Moving to Alabama, he developed a cotton farm near Athens, where he resided most of his life; but he did not neglect his profession. A number of churches, especially in Alabama, were started by him. He also gave much attention to enlarging congregations and building church edifices, as in Nashville and Memphis, Tenn. His main emphasis, however, was always on spreading Cumberland theology, and he left sound impressions of religious reality.

Throughout his career Donnell was recognized as an outstanding leader, noted particularly for his efforts at peacemaking. He was the first president of the first missionary board of his denomination, and in 1837 was moderator of its general assembly. Deeply concerned about education, principally religious education, he was instrumental in the founding of Cumberland University at Lebanon, Tenn. Attracted by its students, he became its pastor in 1846. His last years were spent at Athens, Ala. In 1852 he published a book entitled Thoughts on Various Theological Subjects. A portrait of him was printed in D. Lowry's 1867 Life and Labors of Rev. Robt. Donnell.

Donnell was married twice: in 1818 to Ann Smith, daughter of Colonel James W. Smith, who brought him considerable property; and in 1832 to Clarissa Lindley, daughter of the Reverend Jacob Lindley.