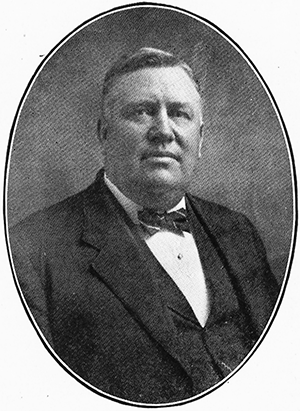 John Solomon Melanchthon Efird, textile executive, was born on a farm near Albemarle. A son of Ireneus and Mary Catherine Treece Efird, he was christened John Solomon Melanchthon but later dropped Melanchthon from his name. Educated chiefly by his father, he operated a gristmill, a store, and a sawmill at Efird's Mills in Stanly County. From 1896 until his death he managed the Efird Manufacturing Company, a textile plant in Albemarle. He also was a director of two banks and several other North Carolina cotton mills. In 1907 and 1915 he served as a state senator. At the time of his death, he was a trustee of Lenoir-Rhyne College at Hickory and of Jackson Training School at Concord.

Efird made generous donations to Mount Pleasant Collegiate Institute and Mont Amoena Seminary, Lutheran schools at Mount Pleasant, and gave a new building to St. Martin's Lutheran Church in Stanly County. The nurses' home at the Stanly County Hospital is named in his honor, and Efird Hall at the Lutheridge Assembly Grounds, Arden, is a memorial to Mr. and Mrs. John S. Efird.

On 14 Aug. 1879 Efird married Sophronia Isabella Foreman; they were the parents of eight children: William Titus, Robert Lee, Columbus Polycarp, Clara Florence, Walter Guy, Jasper Jerome, Bessie May, and a daughter who died in infancy. He married Bertha Estelle Snuggs, his second wife, on 27 June 1900; they had one adopted child, Minnie Estelle.