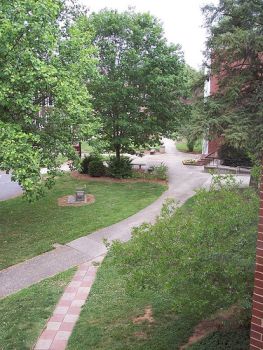 Lenoir-Rhyne College opened in Hickory as Highland College (successor to Highland Academy) in 1891. Its founders were four Lutheran pastors and educators-Andrew L. Crouse, Robert A. Yoder, William P. Cline, and Jason C. Moser-who had dreamed of establishing a Christian college in the town. The school stood on 56 acres originally owned by Wilkes County lawyer Walter Waightstill Lenoir, who donated the land in his will for the purpose of establishing a school. The school opened as Highland College, but changed its name four months later to Lenoir College in memory of its benefactor. In 1895 the school established a sponsorship with the North Carolina Synod of the Evangelical Lutheran Church in America that remains in place. The institution's name was changed to Lenoir-Rhyne College in 1923 in recognition of textile manufacturer, banker, and philanthropist Daniel Efird Rhyne, who made a generous donation to the college in 1922.

Founded on a dedication to a "liberal culture upon Christian principles," Lenoir-Rhyne enrolled more than 1,400 students by the early 2000s. The college's liberal arts core curriculum features 60 majors in the liberal arts, the sciences, and preprofessional programs. Lenoir-Rhyne created an Institute for Multi-cultural Education and Training in 1989 and a center for women's studies in 1991.