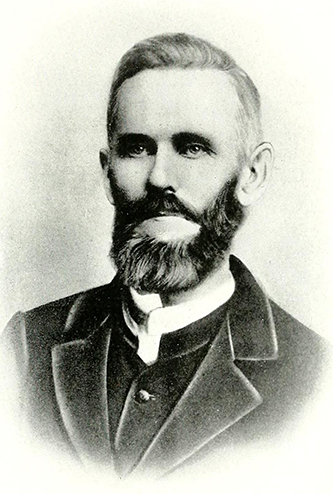 Walter Waightstill Lenoir, lawyer, planter, Confederate officer, and patron of education, was born at Fort Defiance, the family home, in Wilkes (now Caldwell) County, the son of Colonel Thomas and Selina Louisa Avery Lenoir. Two North Carolina counties, Lenoir and Avery, were named in honor of his grandfathers, General William Lenoir and Waightstill Avery. After attending the Bingham School at Hillsborough, he was graduated from The University of North Carolina as valedictorian of the class of 1843. He read law for two years under Judge Frederick Nash of Hillsborough, studied privately another year, and was licensed to practice in the superior courts of North Carolina on 10 June 1846. Because the courts of Caldwell County, where he opened a law office, provided only a small amount of legal business, he gave much of his attention to farming, cattle raising, railroads, and manufacturing.

Before the Civil War, Lenoir strongly opposed slavery and secession and vigorously supported the efforts of Zebulon B. Vance to find a peaceful solution to the nation's problems. However, on 3 Jan. 1862 he enlisted as a private in Company F, Twenty-fifth Regiment, North Carolina Volunteers, then stationed in South Carolina. Early in May he returned to Caldwell County to help recruit a company for Vance's legion; he was elected a lieutenant of this unit, but in late July he became a captain in the Thirty-seventh Regiment and participated in General Thomas J. (Stonewall) Jackson's summer campaign. A severe wound on 1 Sept. 1862 resulted in the amputation of his right leg.

Lenoir engaged in farming and cattle raising in Haywood County from 1863 to 1876 and then moved to Watauga County, where he was elected to the North Carolina General Assembly for the 1883–84 term. He devoted much of his later life to the development of the town of Linville near Grandfather Mountain.

Appointed a trustee of The University of North Carolina in 1883, he served in that capacity until his death. In the 1850s he was a leader in the movement to establish Davenport Female College, a Methodist institution located at Lenoir. His name is perpetuated in the title of Lenoir Rhyne College, a Lutheran school at Hickory. As early as 1875 he offered to donate a tract of land on the outskirts of Hickory for school purposes, but it was not until shortly after his death that a Lutheran group accepted the offer and opened Lenoir College. Its name was changed to Lenoir Rhyne College in 1923 in recognition of the benefactions of Daniel Efird Rhyne. There is a portrait of Lenoir at the college.

Lenoir married Cornelia Isabella Christian (1827–59) of Augusta County, Va., on 10 June 1856. An only child, Annie Tate, died in infancy. He was baptized as a member of the Episcopal church on Easter Day, 1890, and his grave is in the Lenoir family cemetery at Fort Defiance.