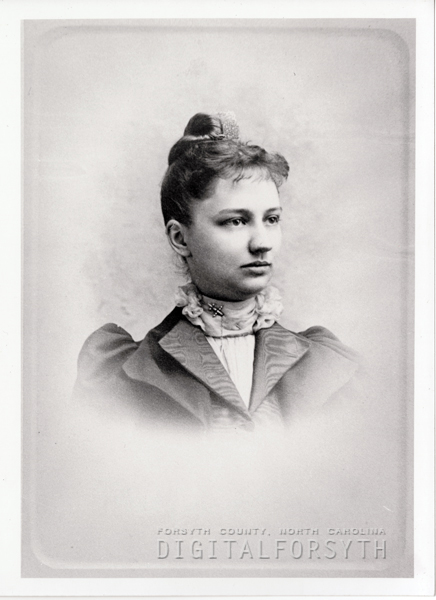 his daughter in her scholarly pursuits. Through her mother, Agnes Sophia deSchweinitz, Miss Fries was descended from four bishops of the Moravian Church (Unitas Fratrum): Count Nicholas von Zinzendorf (1700–1760), who played an important role in the renewal of the ancient church; his son-in-law, Johannes von Watteville (1718–88); John Gottlieb Herman (1789–1854); and her grandfather, Emil Adolphus deSchweinitz (1816–79). Her great-grandfather, Ludwig David von Schweinitz (Lewis David deSchweinitz, 1780–1834), was a botanist of international renown. In 1888 Miss Fries was graduated from Salem College, where she received an A.B. degree in 1890 and an M.A. in 1916.

Reared in a devout Moravian family, she became actively interested in her church's history while in her teens. When she questioned her father about Cornwallis's visit to the area, he urged her to go to her primary sources, the church diaries, and find the answers for herself. She objected, reminding her father that the diaries were not only in German but also handwritten in old German script. According to Miss Fries's account, he said, "Well, Adelaide, you'll never learn to read it any younger," and, smiling, left her. Thus challenged, she began her mastery of Moravian church history and of the old German script in which it was, often carelessly, written.

In 1899 John W. Fries was a delegate from the southern province to the worldwide synod of the Moravian church held every ten years in Herrnhut, Germany, and he took his daughter Adelaide with him. It was an exhilarating experience for her to examine for herself the earliest records of her ancient church. She returned to Herrnhut in 1909 to spend a few weeks studying these old manuscripts in the Moravian archives and visiting friends with whom she corresponded for the rest of her life. Her father, who had first interested her in such scholarly work, remained her mentor and inspiration. The dedication of the Records of the Moravians (1920) reads: "To my Father[,] my comrade in the silent places of historical research." From her mother she learned the art of fine sewing, which she greatly enjoyed as well as gardening, a lifelong hobby.

But her work with the church records claimed most of her time. One day when "a prominent citizen" of Salem suggested to her that it might be wise to find a room in which to keep the various old papers she was working with, she enthusiastically agreed and thus began, without any official authority, to gather and store the many old Moravian manuscript records scattered throughout the province. It was due chiefly to Miss Fries's persistence in ferreting out these valuable papers and diaries that most of them have not been lost or destroyed. The single room gave way to a shedlike building, which provided more space but worried her constantly because of the fire hazard. At length in 1942 she happily supervised the moving of the archives into the present fireproof building on the corner of South Main and Bank streets, only a block from Home Moravian Church and Salem Square.

On 26 Sept. 1911 Miss Fries was officially appointed archivist of the Moravian Church, Southern Province, a position she held for the rest of her life, almost forty years. As archivist she carried on a voluminous correspondence with people from many foreign countries as well as from all the states in this country. Whereas most of the letters contained questions regarding the records and history of the church, many writers asked help in tracing their family back to certain Moravian ancestors. "Memoirs" (brief biographies of Moravian church members read at their funeral services and then filed in the archives) together with the church diaries and other records proved a valuable source of information for Miss Fries in her role of genealogist. She enjoyed this work and became a member of the National Genealogical Society, the New England Genealogical Society, and the Institute of American Genealogy.

Her own memoir speaks of her passion for accuracy, her deep interest in her church and in history, and her abundant sense of humor. An entry in her personal diary notes: "There were four visitors at the archives today—two students engaged in research, one caller investigating a family tree, and a visitor who did not know when it was time to leave." Although a certain dignity and reserve might have discouraged some from seeking her help, those who did approach her were warmed by her friendliness and her sincere desire to aid in any project if it were possible for her to do so. She gave freely of her time to anyone asking it, whether it was a student doing research in the archives or someone requesting that she address a club group. Her friend Dr. Douglas L. Rights remarked that as a speaker she was "noted for her good sense, adaptability, felicity of expression, and inspiration, combined always with the voice of authority." She once admitted that she did not know how to say "No" to her church or her community.

Part of her popularity as a speaker and author resulted from her ability to make the past come alive for her audiences—whether composed of small children, with whom she had a fine rapport, or adults. Her success was no doubt due to the fact that she tried to put herself—and her audiences—back into the period, place, and thoughts of the people of whom she was speaking or writing. In a letter to a friend she wrote: "It has always seemed to me that one of the most difficult and most necessary things in historical work is to catch the point of view of the people who took part in any action. Their standpoint, and theirs alone, determines their relation to that action." This ability was certainly evident in The Road to Salem (1944), the longest and best known of the books of which she was sole author and for which she received the Mayflower Cup. Other books include The Moravians in Georgia, 1737–1740 (1905), Some Moravian Heroes (1936), Distinctive Customs and Practices of the Moravian Church (1949), and, with J. Kenneth Pfohl, The Moravian Church Yesterday and Today (1926). Miss Fries was the author of a number of pamphlets concerning the history or customs of the Moravian Church and of North Carolina, and she contributed a number of articles to historical periodicals. She also was well known as an editor. An example is Forsyth, a County on the March , which received a silver cup as the best county history written in 1949. As an editor, her most important work was the seven-volume The Records of the Moravians in North Carolina (1922–47). Volume 8 was in process of completion at the time of her death. Miss Fries not only selected the material to be included, but also translated it from the handwritten old German script, a monumental task.

Her important contributions were officially recognized by the honorary degree of doctor of letters awarded her first in June 1932 by Moravian College, Bethlehem, Pa., "for excellence in the fields of history, literature, and genealogy"; in May 1945 by Wake Forest College; and in June 1945 by The University of North Carolina. In Chapel Hill she proudly wore the cap and gown her father had used when he received the same degree nineteen years earlier.

Miss Fries was engaged in her usual activities until a few hours before her death. She was buried in the Moravian graveyard, "God's Acre," in Winston-Salem.