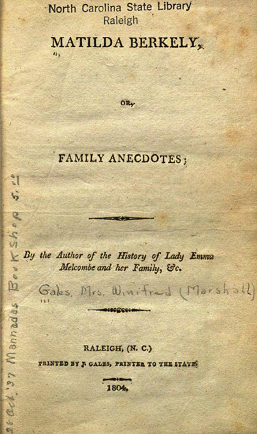 Winifred Marshall Gales, writer, was born in Newark, England, the youngest daughter of John Marshall, scion of a family of distinction though not wealthy. She was educated in the classics, and at an early age demonstrated a literary talent, writing stories and poems. When she was seventeen, she published Lady Julia Seaton, a romantic novel. On 4 May 1784 Winifred married Joseph Gales, a printer, the son of a village schoolmaster in nearby Eckington. The young couple located in Sheffield, where, in 1787, Joseph began publishing the Sheffield Register, a newspaper which became the voice in that area for the liberal movements then stirring England. Though from a staunch Tory family, Winifred joined her husband in his agitation for political and religious reform.

In 1794, Joseph Gales was forced to flee England because of his reform activities. He went to the free city of Hamburg, leaving Winifred to look after the business of running a bookshop and publishing the Register. When it became apparent that her husband would not be allowed to return, she sold the shop and the newspaper, and, with her four children, joined Joseph. They took up residence in nearby Altona. After a year the family, now enlarged by a daughter born in Altona, embarked for America, arriving in Philadelphia on 30 July 1795.

The Galeses adapted easily to Philadelphia. The older children were enrolled in school; in 1796 Joseph began a newspaper, Gales' Independent Gazetteer, which he sold the next year; and Winifred renewed friendships with other refugees from England, among them Dr. Joseph Priestley, the religious reformer and scientist. Both Winifred and Joseph took an active part in organizing the Unitarian Society of Philadelphia.

In the summer of 1799, in response to an offer from Nathaniel Macon of North Carolina, Joseph Gales left an established business in Philadelphia to locate in Raleigh. There, on 22 Oct. 1799, he began the Raleigh Register, a newspaper established to promote the cause of Jeffersonian Republicanism in North Carolina. Winifred made the change without complaint. There were five children: a daughter born in Philadelphia died en route to Raleigh; a sixth, a son and the last child, was born in Raleigh in 1802. Within a short time, Winifred Gales had established a home noted for good conversation and generous hospitality, and had actively entered the life of the new capital city. In 1804, she wrote, and her husband published, Matilda Berkley or Family Anecdotes, the first novel published in North Carolina that was written by a resident of the state.

Winifred and Joseph Gales were leaders in establishing Unitarianism in Raleigh and the South. Both were friends of Jared Sparks, who visited in their home. Winifred's correspondence with Sparks casts much light on religious conditions in the South. By 1831, however, the tolerance and liberalism that the Gales exemplified was becoming difficult to maintain amidst the growing orthodoxy of North Carolina. In 1833, they left Raleigh to reside in Washington, D.C., where their eldest son, Joseph Gales, Jr., edited the National Intelligencer. There Winifred Gales died at the age of seventy-eight. She was buried in the Congressional Cemetery.

Battle, Kemp P. Early history of Raleigh, the capital city of North Carolina. A centennial address delivered by invitation of the Committee on the centennial celebration of the foundation of the city, October 18, 1892,. Edwards and Broughton, printers. 1893. 55. http://digital.ncdcr.gov/cdm/ref/collection/p249901coll26/id/3384

"A Sketch of the Services of the late Hon. W.W. Seaton in Connection with the Smithsonian Institution, and Some Notices of his Life and Personal Character." Annual Report of the Board of Regents of the Smithsonian Institution. Washington: Government Printing Office. 1867. 80-87. http://books.google.com/books?id=VJsFAAAAQAAJ&pg=RA2-PA80#v=onepage&q&f=false (accessed August 12, 2013).