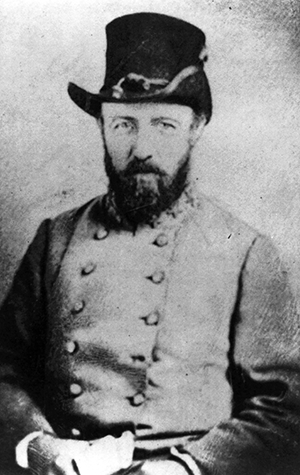 Isham Warren Garrott, lawyer and Confederate soldier, was born in Wake County, the son of Isham Garrott, one of eleven sons of Thomas Garrott, and Mary Sims Garrott. The family lived for a time in Anson County, but then young Garrott apparently returned to Wake County from which he attended The University of North Carolina during the years 1837–40. After studying law there, he was admitted to the bar. Garrott's parents were not wealthy so he had to make his own way in the world. He moved first to Greenville, Ala., and in the following year to Marion, Perry County, where he formed a law partnership with James Phelan, who was afterward a Confederate senator from Mississippi. Garrott soon became interested in public affairs and in 1845–49 represented Perry County in the Alabama legislature. Later he practiced law with Judge William M. Brooks. In the presidential election of 1860, Garrott served as a Breckinridge elector. When Alabama joined the Confederacy in 1861, he was sent as a commissioner to his native state by Governor Andrew B. Moore to seek the cooperation of the North Carolina General Assembly in the movement for secession. Upon returning to Alabama, Garrott, with the assistance of E. W. Pettus, raised the Twentieth Alabama Regiment, which was organized at Montgomery on 16 Sept. 1861 with Garrott as its colonel.

The Twentieth Alabama saw service in the Civil War first as part of General J. M. Wither's army in the defense of Mobile, Ala., where it spent the fall and winter of 1861. In February 1862, the regiment was sent to Knoxville, Tenn., to join General E. Kirby Smith's army in the Department of Eastern Tennessee. During the great Kentucky campaign in the fall of 1862, Garrott and his men served in General Edward D. Tracy's brigade of Smith's army. That December Tracy's brigade accompanied the division of General Carter L. Stevenson to Mississippi to reinforce General John C. Pemberton's army at Vicksburg against Union forces under General Ulysses S. Grant. Here Garrott and his regiment passed the winter. When Grant began his famous campaign to envelop the rear of Vicksburg at the end of April 1863, Tracy's brigade was ordered to reinforce General John S. Bowen's command at Port Gibson, Miss., which was contesting Grant's advance. After a grueling forty-four-mile forced march from Vicksburg, the brigade joined Bowen's division and took part in the Battle of Port Gibson on 1 May. In this first engagement of the Twentieth Alabama Regiment, Garrott showed great skill in directing his men under fire. Tracy's brigade, which formed the right flank of Bowen's line, came under heavy attack from overwhelming Union forces and General Tracy was killed early in the fighting. As senior colonel, Garrott assumed command of the brigade and served with distinction for the rest of the engagement. The Union forces outnumbered Bowen's command about three to one and at nightfall the general was forced to retire from the field. During the day's fighting, the Twentieth Alabama had suffered dire losses—a total of 272 men killed, wounded, and missing. Garrott later returned to lead the regiment when General Stephen D. Lee assumed command of Tracy's brigade.

On 16 May 1863, Garrott and his men took part in the Battle of Champion Hill, east of Vicksburg, where the colonel again proved to be a skilled and efficient commander in battle. He then led his men in the siege of Vicksburg, which began two days later. During the siege, Garrott frequently appeared along his lines and at his outposts to speak with and encourage his men. On 17 June he made such a visit to one of his outposts. Seeing an opportunity to take a shot at the enemy, he asked to borrow the rifle of one of his men. As Garrott was taking aim, he was shot through the heart by a Union sharpshooter. Unfortunately, though he had been promoted to brigadier general on 29 May (to rank from 28 May), his commission, which had been forwarded from Richmond, failed to reach him before his untimely death cut short a promising military career. Beloved by his men, Garrott was buried at Vicksburg. He has been described as persistent and energetic, and an untiring worker.