William Tryon (1729-January 27, 1788), royal governor of both North Carolina and New York, served the two colonies during times of controversy and conflict. Tryon was born in Surrey, England, to Charles Tryon and the former Lady Mary Shirley. Though not formally educated, Tryon advanced militarily and politically by virtue of being wellborn and well married. A professional soldier, he was first commissioned as a lieutenant in 1751 and rose erratically through the ranks thereafter. William Tryon married Margaret Wake on December 26, 1757. Together they had two children. Their daughter Margaret died in England, unmarried, at age thirty, and their son died in infancy in North Carolina

Tryon was related by marriage to Lord Hillsborough, Lord of Trade and Plantations. It is likely that Hillsborough was behind Tryon’s appointment as lieutenant governor of North Carolina in 1764 when Arthur Dobbs requested retirement from the governorship. Tryon, his wife, and young daughter arrived in the colony in October 1764. He assumed the duties of governor on March 28, 1765, upon Dobbs’ death, and received his commission within a few months.

Tryon’s first political challenge was the Stamp Act crisis, which erupted in October 1765 in North Carolina. Sympathetic with the colonists, Tryon understood that the tax would cause great hardship in the colony’s cash-poor economy, but in deference to the crown required the taxes be paid. Through organized resistance, North Carolinians avoided paying the tax until the act was repealed effective May 1, 1766. 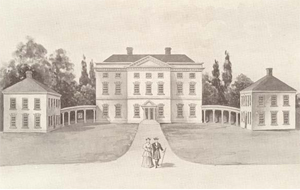 Tryon erroneously believed that the colonists would not object to a tax levied to erect a capitol and governor’s residence. The assembly appropriated funds and authorized Tryon to oversee the project, which quickly exceeded the budget. Some North Carolinians felt that injustices in the colony, including the tax for “Tryon’s Palace,” corrupt officials, and lack of representation for the backcountry, needed regulation. They therefore formed a resistance group known as the Regulators. After several defiant incidents, a special session of the assembly was called which caused only further agitation. Tryon organized and led militia into the backcountry in 1768 and 1771, defeating the Regulators on May 16, 1771, in the Battle of Alamance. Following the battle, the governor offered pardons to all who agreed to take the oath of allegiance, with a few named exceptions. Ultimately, six leaders were hanged and the rank and file were pardoned.

While on the expedition in the backcountry in 1771, Tryon was notified of his transfer to the governorship of New York. Subsequently, he lost the majority of his personal effects and papers in a fire at his New York residence. Throughout the Revolution, Tryon maneuvered for military position, attaining Major General. Feeling underemployed in America, Tryon asked to be excused from the civil governorship and allowed to return to England, which he did in 1780. He continued to pursue military promotions there, reaching Lieutenant General. Tryon died on January 27, 1788, and is buried at St. Mary’s Church, Middlesex, England.

Haywood, Marshall De Lancey. 1903. Governor William Tryon, and his administration in the province of North Carolina, 1765-1771. Services in a civil capacity and military career as commander-in-chief of colonial forces which suppressed the insurrection of the regulators. Raleigh: E.M. Uzzell, printer.

Tryon, William, and William Stevens Powell. 1980. The correspondence of William Tryon and other selected papers. Raleigh: Division of Archives and History, Dept. of Cultural Resources.

This website rocks, just one question, where do you get the information?

Thanks for visiting NCpedia and sharing your comment!  And that's a great question.

I hope this helps!  Please let us know if you have more questions!

I am to give a talk to the

I am to give a talk to the County(state) History Society about George Finch, Lord Winchilsea. In 1780 he dined with Governor William Tryon in New York and in 1767 he visited William's younger brother Robert. May I please use the images of William Tryon and of Tryon House from your NCpedia website in a powerpoint presentation to the Rutland Local History Society Kind regrds Paul Reeve Oakham Rutland

Thank you for inquiring about

Thank you for inquiring about the images of William Tryon and the Tryon House. We do not hold the copyright for these images. I've forwarded your request to the State Archives of NC for the image of William Tryon, and someone should get back to you shortly. You should contact the Craven County Digital History Exhibit for permission to use the image of the palace. I hope this information helps. Good luck!