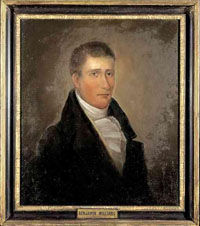 Benjamin Williams (1 January 1751-20 July 1814) served as governor in nonconsecutive terms. Born in Johnston County on January 1, 1751, he was son of John Williams and the former Ferebee Pugh. Through his many years of politics, agriculture played an important role in his life as a private citizen. Williams’s wife was the former Elizabeth Jones, whom he married in 1781. Their union produced only one child, a son named Benjamin.

With the approach of the American Revolution, Williams became active in public affairs and in the Patriot cause, representing Johnston County in the colonial assembly in 1775 and in the provincial congresses of 1774 and 1775. Commissioned a lieutenant soon after hostilities began, he rose to the rank of colonel following the Battle of Guilford Courthouse. Remaining active in state politics during the interim periods of his military service, he served in the House from 1779 to 1780 and in the Senate from 1780 to 1782. Following the Revolution, Williams returned to the House in 1785 and to the Senate every other year from 1784 to 1789. He served to the state constitutional convention of 1788, and was appointed to the original board of trustees of the University of North Carolina in 1789. From 1794 to 1795 he was active in national politics as a member of the United States House of Representatives.

Returning to North Carolina, Williams resided in the fledgling city of Raleigh. It was there that he was living in November 1799, when elected to the governorship. Reelected in each of the next two years, he served the maximum three consecutive terms. In 1807 he was representing Moore County in the state Senate when elected to his fourth and final term as governor. A candidate for governor no fewer than six times between 1800 and 1809, Williams enjoyed a broad base of support.

Although sometimes classified as an Anti-Federalist or Republican, Williams should be viewed instead as a marginal or restrained Federalist. Indeed, his initial election as governor in 1799 occurred during the brief resurgence of Federalism produced by the threat of war with France. Thereafter, his successive reelections resulted from the combined support of his fellow Federalists and that of Republicans. As chief executive, Williams provided encouragement to internal improvements and public education, but lacked the effective means of financing. Against the backdrop of national politics, it was his adherence to Federalist principles that eventually eroded his base of bipartisan support. After Congress imposed its embargo on foreign trade in 1807, Williams refused repeated calls to convene a special session of the legislature for the relief of debtors. When the legislature met in regular session the next year, its resentful members not only provided statutory relief to debtors, but denied Williams reelection to an anticipated fifth term. Williams departed from the governorship in 1808, but not entirely from public life. During the following year he was again elected from Moore County to the state Senate, thus concluding his varied career in politics.

Williams’s last years were devoted almost entirely to his Moore County plantation, now open to the public as the House in the Horseshoe State Historic Site. He died there on July 20, 1814, and was buried some distance away in the family cemetery. In 1970 he was reinterred in the side yard of his residence.