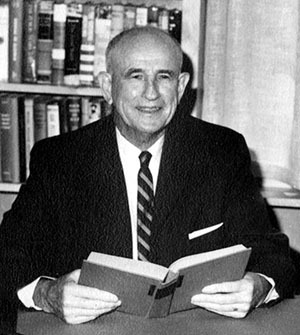 Fletcher Melvin Green, educator and distinguished historian of the South, was born near Gainesville, Ga., the son of Robert Chambers and Mary Mahala Haynes Green. He received his early education in Murraysville, a small community in Hall County adjacent to Gainesville, and he began his college studies at Emory-at-Oxford. After serving in World War I with the American Expeditionary Force in France, he completed his studies at Emory University, receiving the bachelor of philosophy degree in 1920, with membership in Phi Beta Kappa. He was awarded the master of arts degree (1922) and the Ph.D. (1927) by The University of North Carolina.

During the academic year 1944–45, Green was a visiting professor at Harvard University, and in the spring semester of 1967 he was a research fellow at the Huntington Library. He spent the year 1968–69 at Oxford University as Harmsworth Professor of American History. For various summer sessions Green was a visiting professor at the College of William and Mary, University of Tennessee, Duke, Missouri, Columbia, Stanford, and Northwestern. He delivered the Walter Lynwood Fleming Lectures at Louisiana State University in 1949, the J. P. Young Lectures at Memphis State University in 1964, the Eugenia Dorothy Blount Lamar Lectures at Mercer University in 1968, and the inaugural Rembert W. Patrick Lecture at Guilford College in 1970. In 1962, he was one of the lecturers for the Institute of Southern Culture at Longwood College. Emory University (1957) and Washington and Lee University (1960) awarded him the honorary doctor of literature; Oxford University, the honorary master of arts (1969); and The University of North Carolina, the doctor of laws (1975).

Green's career as a graduate student and teacher was touched by three of the South's noted historians—Joseph Grégoire de Roulhac Hamilton, Walter Lynwood Fleming, and William E. Dodd. It was Hamilton who directed his graduate program at The University of North Carolina, and who was held in particular esteem and regarded with genuine affection by Green. Green was associated with Fleming at Vanderbilt University, and the study at Chicago had found him in the classes of William E. Dodd.

Green was the author of Constitutional Development in the South Atlantic States, Democracy in the Old South and Other Essays, and The Role of the Yankee in the Old South. His edited works included Henry Kyd Douglas, I Rode With Stonewall; Essays in Southern History Presented to Joseph Grégoire de Roulhac Hamilton; The Lides Go South  . . . and West: The Record of a Planter Migration in 1835 ; John Blackford, Ferry Hill Plantation Journal, January 4, 1838–January 15, 1839 ; William Watson Davis, The Civil War and Reconstruction in Florida ; Susan Dabney Smedes, Memorials of a Southern Planter ; and Thomas Prentice Kettell, Southern Wealth and Northern Profits. He was one of the coeditors for volume one of Travels in the New South. A group of Green's former students prepared the Festschrift, Writing Southern History: Essays in Honor of Fletcher M. Green, which was published in 1965 under the editorship of Arthur S. Link and Rembert W. Patrick. This volume contains a bibliography of his writings prior to that date, and its length may have surprised some who had thought of Green solely in the role of teacher. The writings are sound, scholarly contributions covering topics in both the Old South and the New, and are particularly noteworthy for the wide range of interests they display.

Green was regarded by many as the dean of Southern historians, not only by virtue of his scholarship, but even more because of his accomplishments as a teacher and director of graduate students. He was an able lecturer whose best-known courses, "The Old South" and "The South Since Reconstruction," were always popular. More than 100 students completed their doctorate under his direction, and the number of master's students ran to considerably more than 150. In his review of Writing Southern History, William C. Binkley wrote: "As the director of a graduate seminar in history at the University of North Carolina for the past thirty years, Fletcher M. Green has probably had a more far-reaching influence on the writing of Southern history than has any other man of his generation." Certainly few teachers better understood the mood of their students. Green knew when to apply pressure and how much, and he had the ability to draw from a student his best performance—at times even better than the student thought himself capable of. Though demanding as a teacher and a person who was rarely deceived, Green could be charitable in his judgments. A close friendship existed between him and his students.

A man of many interests, Fletcher Green was an active churchman, the author of a centennial history of the local Methodist church, and for a number of years the teacher of a Sunday School class. Throughout life he retained his love for the outdoors and his interest in sports. As a young man he had played baseball and coached football and basketball; later he was an ardent fisherman and golfer. During all his years as a member of The University of North Carolina faculty and afterward in retirement, he was a faithful follower of the university's athletic teams.