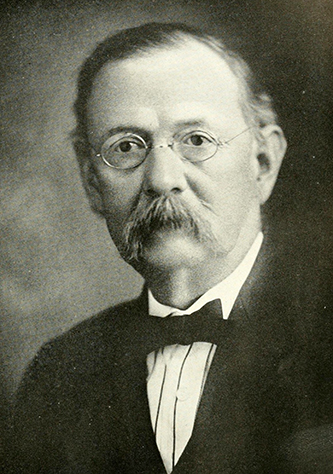 Samuel Andrew Grier, surgeon, physician, and Confederate soldier, was born in the Steele Creek community of Mecklenburg County, the son of Andrew Grier and his second wife, Margaret Barringer Grier. The Grier and Barringer families were prominent early settlers in the Piedmont section of North Carolina. On Grier's paternal side, his great-grandfather was one of the early settlers of the Steele Creek community. His grandfather had fought honorably in the Revolutionary War, and his grandmother was a Spratt whose ancestors were among the first to cross the Yadkin River and settle in western North Carolina. On his maternal side, his ancestors had helped to carve Cabarrus County from Mecklenburg County, and his great-grandfather and grandfather both had served in the General Assembly. Three of his mother's brothers—Daniel Moreau, Rufus Clay, and Victor Clay Barringer—were distinguished citizens of North Carolina. Daniel, the oldest, was a congressman who later served as minister to Spain under presidents Zachary Taylor and Millard Fillmore; Rufus was a Confederate general and state legislator; and Victor, also a legislator, became the U.S. representative to the International Court in Egypt in 1874. Andrew Grier died in 1850, leaving his wife Margaret to rear eleven children: their eight, her daughter by an earlier marriage, and Andrew's two children by his first wife. In 1861 Margaret's four sons and one stepson volunteered for service in the Confederate Army. Of the five, one died of swamp fever and another was killed in action at Bristoe Station, Va., in 1863.

Samuel Andrew Grier received his early education at the Melville School, conducted by Alexander Wilson. At age nineteen he went to Charlotte to study medicine under the direction of Dr. W. W. Gregory. When North Carolina seceded from the Union in 1861 and Governor John W. Ellis called for volunteers, Grier interrupted his medical studies and joined the Hornet's Nest Riflemen commanded by Captain Lewis Williams. This was the first company to leave Mecklenburg County to serve in the war, as well as one of the first in the state to prepare to defend North Carolina against Federal troops. Grier's company was sent to Fort Caswell and then to Raleigh, where in May it became part of Company B of the First North Carolina Regiment. Afterwards this regiment was sent to Richmond and then to Yorktown, which it fortified. With his regiment, Grier saw action at the Battle of Big Bethel Church in June 1861. In 1862, when his term of enlistment was over, he returned to Charlotte and joined the Mecklenburg Rangers of the First North Carolina Cavalry as first sergeant. That July he was promoted to second lieutenant, and in September to first lieutenant. He later became a captain in Company D, Fifth North Carolina Cavalry, which was commanded by his uncle, General Rufus Barringer.

During the war young Grier was wounded three times and on one occasion had his horse shot from under him. At Upperville, Va., in June 1863, he was wounded in the arm so severely that the battlefield surgeon was preparing to amputate the arm when word came that Federal troops were approaching. By the time the Confederate wounded were evacuated, Grier's arm had begun to heal so the amputation did not occur. When he recovered, Grier rejoined his unit, but he missed the Battle of Gettysburg because of his injury. In August 1864 he was wounded again, this time in the foot. His third wound was received at Bellfield, Va., on 3 Dec. 1864, when he was shot in the side. On 4 Apr. 1865, he was captured outside Richmond and imprisoned in the Old Capitol prison in Washington. He was still there on the night Lincoln was assassinated. Grier was later moved with other Confederate prisoners to Johnson's Island on Lake Erie and remained there until his release in June 1865. Though he had fought diligently for the South, he accepted defeat and worked just as earnestly to make the reunion of the two sections a smooth one. Over the years Grier retained his affiliation with Confederate veterans' organizations. He was surgeon general on General W. H. Smith's staff, North Carolina Confederate Veterans, and an active member of the Cabarrus Camp of Confederate Veterans. He was the last survivor of the Battle of Bethel and of the Hornet's Nest Riflemen.

Returning to his home at Steele Creek after the war, Grier spent several years helping his mother run the farm and then resumed his study of medicine at Jefferson Medical College in Pennsylvania. Beginning in 1876, his career as a country doctor spanned a period of fifty-five years; for most of that time he practiced in the communities of Rocky River and Harrisburg in Cabarrus County. When the United States entered World War I, he offered his services to his country. Turned down because of his age, he was told that he could be of greater assistance by continuing to minister to the people he had served faithfully for so many years. During his long period of service as a practicing physician, Grier's name had become a household word to the people of his community. He was on call day and night, and he never refused to respond when needed. Many times he received no pay; when he was paid, it was often in goods rather than money. A reception to honor him on his ninetieth birthday was given at Harrisburg by some of his former patients, friends, and neighbors. On this occasion he was showered with congratulatory messages and tributes of appreciation.

An interesting event occurred during Grier's medical career. In 1896, a patient of his, a child named Ellen Harris, swallowed a thimble that lodged in her windpipe. Fortunately the thimble was the type that had an opening at both ends. Grier was aware that the previous year Wilhelm Roentgen had discovered the X-Ray in Germany, and that Henry L. Smith, professor of physics at Davidson College, was conducting some experiments with it. When Grier informed Smith of his patient's predicament, Smith traveled the thirty miles to Rocky River, bringing his crude apparatus with him. Using the X-Ray Smith was able to locate the thimble and marked its location by painting the child's skin with black ink in the vicinity where the thimble had lodged. The girl was then taken to Charlotte, where the thimble was removed after more than two hours of surgery. Ellen Harris recovered and the story of her operation, made possible by a discovery less than a year old, was publicized throughout the world. This was one of the first times the X-Ray was used in America.

On 25 Nov. 1868 Grier married Mary Jane Gilmer, the daughter of Dr. James F. Gilmer of Cabarrus County. She, too, was a remarkable person. An 1867 honor graduate of the Charlotte Female Institute (later Queens College), she was the ideal wife for one such as Grier. Until her death in 1907 she worked faithfully by his side aiding him in his work, serving her church and community, and raising their children with the same ideals that both parents possessed. The children were Elva and Gilmer, both of whom died in childhood; Claudia, who, with her husband J. Mercer Blain, was a Presbyterian missionary to China for forty years; Samuel Andrew, Jr., who served in the Spanish American War; Elizabeth (Butt); Margaret (Hall); Mary Gilmer (Bost); Evelyn (Richmond); Thomas, a captain in World War I; and Anna B. (Parrish). Grier died at Harrisburg six months before his ninety-first birthday.

Family Bible and family papers, including war record of Grier prepared by himself (in possession of the author).