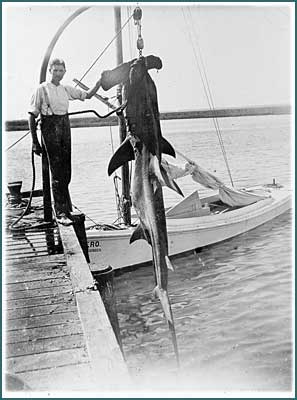 Eugene Willis Gudger, internationally known ichthyologist, was born in Waynesville, the son of James Cassius Lowery Gudger, adjutant of the Twenty-fifth North Carolina Regiment, Confederate Army, and later a superior court judge, and of Mary Goodwin Willis Gudger. He was educated at Emory and Henry College in Virginia (A.B., 1887), the University of Nashville (M.S., 1893), and Johns Hopkins University (Ph.D., 1905), where he was an assistant in the general biological department. Before and after his doctoral studies he taught at Asheville College (1893–94), Peabody High School, Little Rock, Ark. (1895–1904), and the North Carolina College for Women at Greensboro (1905–19).

When Gudger was ten years old, Mrs. Rebecca Harding Davis, the mother of Richard Harding Davis, went to Waynesville looking for material on a series of articles about the Appalachian Mountains. There she met and was assisted by the Gudger family, and became interested in young Eugene. After returning to Philadelphia, she sent him a subscription to Saint Nicholas Magazine and a book, Land and Water by Jacob Abbot, which started his interest in natural history. Upon graduation from Johns Hopkins, he sent her an invitation to the commencement exercises and told her how she had helped him decide on his lifework.

As a young man, Gudger studied the geology of the entire Blue Ridge from the Delaware Water Gap and Big Stone Gap to the foothills of the range in Georgia. However, he soon turned to fish, becoming an authority on the breeding habits of the pipefish shark (a study begun by Aristotle before 322 B.C.) and the whale shark. When someone said the latter was dangerous, Gudger observed wryly: "About as dangerous as a cow in a pasture." In differing with one scientist he used as a source the biblical verse, "And he slew him with the jaw bone of an ass," stating triumphantly, "And I slew him with his own jaw bone."

The first time he saw the ocean was when he began working as an investigator for the U.S. Bureau of Fisheries at Beaufort, a post he held from 1902 to 1911. In 1907, he received a grant from Carnegie Institute to do research on the gaff-topsail catfish at the Carnegie Marine Laboratory in Dry Tortugus, Fla. The American Museum of Natural History in New York called on him in 1919 to edit the volumes of the Biography of Fishes, a work he completed in 1923 after an enormous amount of research. Some years later he was made associate curator of fishes, serving from 1934 until his retirement in 1938 with the title of honorary associate in ichthyology. During this time he was the editor for fish terms for the third edition of Webster's International Dictionary, published in 1935. Although named editor of the Bashford Dean Memorial Volume, he wrote a third of it. Gudger was the author of over three hundred articles on fish, from "Natural History of the Whale Shark" to "The Rain of Fishes."

He was a fellow of the American Association for the Advancement of Science and of the New York Zoological Society, a life member of the Museum of Natural History, and an honorary member of the Zoological Society of London. Other memberships included the Society of American Naturalists, American Society of Zoologists, American Society of Ichthyologists and Herpetologists, History of Science Society (secretary, 1907–18), Salmon and Trout Association of Great Britain, and North Carolina Academy of Science. An asterisk appeared after his name in American Men of Science designating him one of the thousand most outstanding scientists in the country.

A Mason and lifelong member of the Waynesville Methodist Church, Gudger enjoyed Gilbert and Sullivan operas, walking, and anything to do with mountains. He never married. In 1953 he returned to his home in Waynesville and died there three years later. At his request, the word "ichthyologist" was carved on his tombstone.