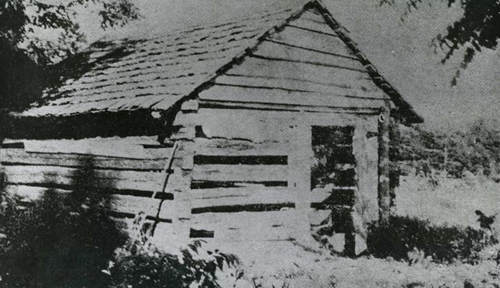 Nancy Hanks (Lincoln), mother of Abraham Lincoln, sixteenth president of the United States, was born in Campbell County in southwestern Virginia. The identity of her father has never come to light and it is assumed that her mother, Lucy Hanks, bore her out of wedlock. Lucy Hanks married Henry Sparrow of Mercer County, Ky., in 1791 and apparently left her young daughter Nancy to live with and help in the household of Richard Berry of Beechland in Washington County, Va. During this period, Nancy Hanks is said also to have lived with Thomas and Elizabeth Sparrow and then with her uncle, Richard ("Dicky") Hanks.

Carl Sandburg in his biography of Lincoln has the infant Nancy Hanks accompany her mother Lucy to Kentucky, but he ignores completely a vast array of North Carolina tradition as well as the lore indicating that she lived in the Berry and Sparrow households. Also included in this lore are accounts of Nancy's traveling into North Carolina, prior to 1790, with the household of her uncle Dicky Hanks. They settled in what was then Lincoln (now Gaston) County on the banks of the Catawba River, near the present town of Belmont, where a marker stands claiming that Nancy Hanks once lived there.

Dicky Hanks left the Belmont area, but it is said that Nancy stayed and went to work in the household of Abram [Abraham] Enloe in what is now Rutherford County, between Ellenboro and Bostic. The Enloe family later moved farther west to Swain County and, according to western North Carolina tradition, took Nancy with them.

Virginia tradition includes the "Hanks-Hitchcock" story, which says that Joseph Hanks of Virginia married Nancy Shipley and moved to Nelson County, Ky. Their youngest daughter, Nancy, is said to have married Tom Lincoln in 1806. Other traditions have Nancy Hanks growing up in the area near Linville, Va. The truth is difficult to determine because there were a number of Hanks (and Hauks) living in southwestern Virginia at the time, and "Nancy" was a very popular name for a girl.

It is certain that by 1806 Nancy Hanks was living in Kentucky, where on 12 June 1806 she married Thomas Lincoln, a barely literate homesteader with North Carolina connections. They lived first in Elizabethtown, Ky., where she bore a daughter, Sarah, on 10 Feb. 1807. In May 1808 they moved from Elizabethtown to a nearby farm, then to another farm on the South Fork of Nolin Creek near Hodgenville. Here on 12 Feb. 1809 she bore her son, Abraham. The midwife attending referred to Sarah Lincoln as "a little girl there." In the spring of 1811 they moved ten miles to the northeast, to a new farm on Knob Creek. There another son, Thomas, was born in 1812, but he soon died.

Because of difficulty with land titles in Kentucky, Tom Lincoln decided to move his family to the Indiana frontier to settle on public land. In 1816, the Lincolns migrated to Perry (Spencer) County, Ind., and staked a claim on the banks of Pigeon Creek, about one and a half miles from Gentryville. They were joined there in less than a year by Tom and Betsy Sparrow and Dennis Hanks. The Sparrows died in September 1818 of a dehydrating illness called milk sickness, and Nancy Hanks Lincoln died of the same disease on 5 Oct. 1818.

Rumors circulated widely in the last decades of the nineteenth century, and persist even to the present, that Abraham Lincoln was born of an illicit affair between Nancy Hanks and any number of North Carolinians. All these tales seem to be unfounded, especially in the light of Abraham's birth three years after his mother's marriage to Tom Lincoln, and especially if one accepts the argument that his birth was preceded by that of Sarah. Perhaps the tenacity of these derogatory tales, coupled with their diversity (including at least three candidates for paternity and more for look-alike "half brothers"), caused Sandburg to discount completely the North Carolina tradition in connection with Nancy Hanks. Sandburg certainly admits to a cloud surrounding the character of Lucy Hanks. Perhaps Nancy followed in her mother's footsteps and in fact gave Mrs. Abram Enloe reason to send her packing to Kentucky. She may have been pretty, with "light hair, beautiful eyes, a sweet, sensitive mouth"; moreover, she has been described as intellectually vigorous, spiritually inclined, affectionate, and amiable. Less kind descriptions would indicate that she was sallow, sad, and pitiful.

Much of her life was spent, as with many in that period of frontier expansion, in moving again and again to the edge of civilization. As a result, many of the facts of her life are lost or are relegated to oral tradition. It is known, however, that she died in the wilderness at Pigeon Creek and was buried there.

The NC connection is NOT

The NC connection is NOT wrong. There is a lot of proof that Nancy had Abraham here in Bostic. Google pictures of Abe Enloe's legitimate son. He and Abe are definitely half brother's.

Abraham Hanks didn't marry anyone other than Lucy Jennings, had one living son, John, and has census records, marriage records, pension records, property records, and is buried in Tennessee! The Berry brothers Richard and Francis, owned a high end furniture business, where Nancy Hanks worked for Richard Jr.'s wife, Polly Ewing Berry. They were not her guardians! She was the daughter of Lucy Hanks, period. PLEASE stop spreading this nonsense about the Shipley, and North Carolina connection. It's wrong, just plain proven wrong. All documentation proves this is nothing but a fairy tale.