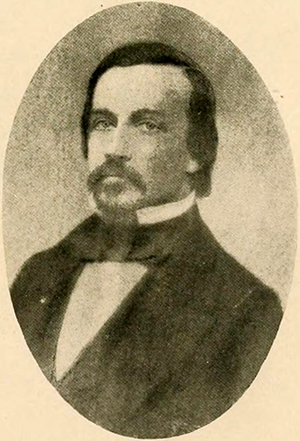 Christopher Happoldt, physician and editor, was born in Charleston, S.C., of German and English ancestry. His father was Christian David Happoldt, a Charleston merchant, and his mother was Sarah Elizabeth Marlen, granddaughter of Edward Marlen, senior customs inspector at the port of Charleston in the early 1800s. As a boy of fifteen, he traveled to Europe with the learned pastor-naturalist Dr. John Bachman, minister of St. John's Lutheran Church in Charleston and collaborator of John James Audubon. On this journey he and Bachman stayed at the Audubon residence in London for several weeks.

Happoldt received his classical education in Charleston and was graduated from the South Carolina Medical College in 1851 at the head of his class. He next spent several years in Europe further pursuing his medical studies at the universities of Paris and Berlin. Following his return to America in 1854, he became the editor of the Charleston Medical Journal and Review, one of the most prestigious medical journals in the country. This position brought him in contact with the best physicians in the United States and in Europe, and secured for him a position of authority in his profession.

On 28 Oct. 1856, Happoldt married Emily Amelia Greenlee of Morganton, N.C. The Greenless were a prominent family of Burke County, descendants of David Washington Greenlee, owner of a large plantation on the Catawba River. After his marriage Happoldt took his bride to live in Charleston, where he continued his career as physician and editor. For a few years all went well. His wife had given him a lovely daughter, Minerva, and his journal and medical practice were both highly successful. In 1858, his career was completely changed when his wife wished to return to her home in Morganton. Happoldt relinquished his editorship of the Charleston Medical Journal and moved to Morganton where he began a new medical practice. Even though Morganton was not an important medical center, it was a beautiful town with a distinguished history. Here he found cultivated and intellectual company with such gentlemen as Colonel John Pearson and members of the Ervin family.

In 1861, with the outbreak of the Civil War, Happoldt was commissioned as a surgeon in the Confederate Army. After the war he returned to his practice in Morganton. Life moved slowly and uneventfully for him until September 1873, when a yellow fever epidemic struck the Mississippi Valley. He volunteered his services and was sent to Memphis, where he proved to be one of the most outstanding physicians fighting that dread disease. The epidemic was brief and in a few months he returned to Morganton. When the fever struck again in 1878, he volunteered to battle his old enemy in Vicksburg. This epidemic was much worse and the doctor himself fell a victim to the disease. He died at Vicksburg, struggling to overcome the deadly pestilence that had swept towns and villages out of existence. On his gravestone is the inscription: "At the call of the Howard Association he volunteered for duty in the yellow fever district and was assigned to Vicksburg where he nobly died in helping to keep others alive."

In Morganton Happoldt was survived by his wife and four daughters: Minerva, Lucy Greenlee, Mary Greenlee, and Sarah Elizabeth. His heroic life was later commemorated by Miss Minnie May Curtis of Raleigh in a poem, "The Uncrowned Hero," published in the Morganton Herald on 23 Mar. 1893.

Ralph S. Greenlee, Genealogy of the Greenlee Family in America (1908).

Dr. Happoldt is an ancestor

Dr. Happoldt is an ancestor