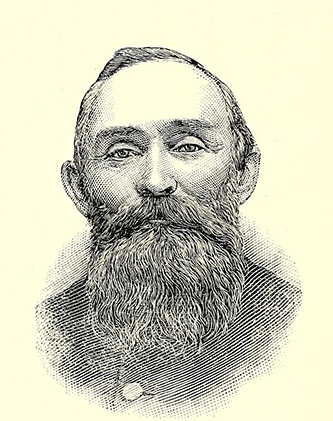 William Bernard Harrell, songwriter, physician, and preacher, wrote the seven quatrains of "Ho! for Carolina!" which at one time rivaled William Gaston's "The Old North State" as a North Carolina anthem. The story goes that in the opening months of the Civil War, a train carrying troops to the Virginia battlefields made a stop at Wilson. A young Georgian stuck his head from the train window and shouted to the crowd gathered there, "Hurrah for old North Carolina! My folks were all from North Carolina, and a grand old state she is. Hurrah! Hurrah!" As Harrell walked home from the railroad platform, the Georgian's words kept recurring to him. He soon wrote down the well-known lines with its chorus beginning, "Ho! for Carolina! that's the land for me; / In her happy borders roam the brave and free," and his wife composed music to fit them. Immediately the song gained popularity and was sung throughout the state. Harrell's many lyrics, hymns, and patriotic verses have never been collected.

Though his paternal line came from Gates County, Harrell was born in Suffolk, Va., the younger of two surviving sons of James and Martha McGuire Harrell. He grew up in North Carolina, but later attended the Norfolk schools and Randolph-Macon Academy in Boydton, Va. In 1849, he was graduated from the School of Medicine of the University of Maryland. He was married in 1851 to Anne Judson Battle, daughter of Amos J. Battle of Edgecombe County, one of the first trustees of Wake Forest College. In 1863–64 he was acting assistant surgeon and served as an inspector of hospitals at the Camp of Instruction in Dublin, Va. On 1 May 1865, at Staunton, Va., he was paroled from his post as medical examiner on the Board of Conscript Surgeons and allowed to return home.

During an 1868 revival in Snow Hill, Harrell entered the ministry of the Baptist church and became the first pastor of the church there. Though he gave up the practice of medicine, he continued to teach in small schools both before and after his call to the pulpit. At various times he held pastorates in Stanly County, Smithfield, Clayton, Selma, Durham, Hillsborough, Graham, Winston, and Monroe. He moved to Dunn about 1888, and in 1893 he had charge of three churches of the Cedar Creek Association.

Harrell and his wife, who died three days before he did, were buried in Greenwood Cemetery, Dunn. The oldest of his four sons and seven daughters was Eugene G. Harrell, an educator. Five children survived their parents: Mabel (Mrs. J. L. Hines); Rosa (Mrs. Stoller); Albert B. Harrell, a Baptist preacher; William Payton Harrell; and Ida Caroline (Mrs. Hardy Horne), the author of two books of poems.

He was also my grandfather's

A broadside of the song Ho

A broadside of the song Ho For Carolina is in the NC archives,The original composition is in the UNC Chapel Hill archives in Harrell papers

He was my grandfather’s