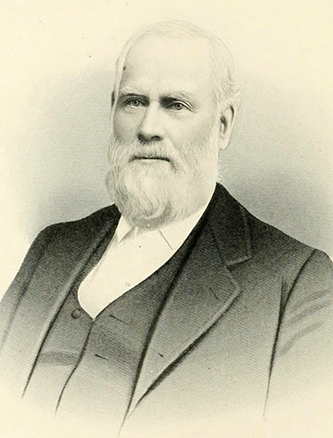 William Joseph Hawkins, physician and railroad official, was born on his father's plantation in Franklin (now Vance) County. His grandfather was Revolutionary War Colonel Philemon Hawkins II and his father was John Davis Hawkins, one of the largest planters in his district; his mother was Jane A. Boyd of Mecklenburg County, Va. For several years William studied at home under tutors and at the Spring Grove Academy in Franklin County. In 1837 he entered The University of North Carolina, but transferred after two years to William and Mary College, graduating with distinction in 1840. In 1842 he was graduated from the medical department of the University of Pennsylvania and began practicing at Ridgeway, N.C.

Hawkins quickly developed a large medical practice and by 1850 owned twenty-five slaves and real estate valued at $13,000. Soon, however, he became absorbed in the business world. Following his father's interest, he invested in the Raleigh and Gaston Railroad and was appointed to its board of directors. In 1855 he became president of the railroad.

Hawkins was also a large stockholder in and a director of the Raleigh National Bank, and in 1870 he was instrumental in the founding of the Citizens National Bank of Raleigh. He became its president in 1890 and served until his death. From 1881 to 1891 he was a trustee of The University of North Carolina. He died in Philadelphia, where he had gone for medical treatment.

Membership and Ancestral Register . . . of the North Carolina Society of the Sons of the Revolution (1898).

Souvenir Presentation Ceremonials of a Silver Service, to Dr. W. J. Hawkins (by the Raleigh and Gaston Railroad, September 1875).