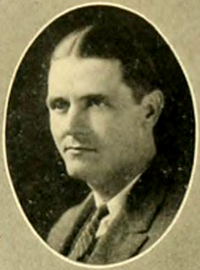 Herbert James Herring, educator and university administrator, was born in rural Pender County, the son of Julian Fletcher and Minnie Alice Johnson Herring. After graduating with honors from high school, he entered Trinity College (now Duke University) in the fall of 1918 and was graduated with a B.A. degree in 1922. He taught English in R. J. Reynolds High School, Winston-Salem (1922–24), then returned to Durham in mid-1924 to become assistant dean of Duke University, thereby forming an affiliation that continued through his professional career. In 1928–29 he was granted a leave of absence for graduate study at Columbia University, receiving an M.A. degree in 1929. Later, he was awarded an honorary LL.D. degree from Juniata College, Huntingdon, Pa. (1948).

At Duke University, Herring taught speech (1925–43) and was promoted to dean of men (1935). In 1942 he became dean of Trinity College, the university's undergraduate college for men, and held the position until mid-1956. In 1946 he was given the dual appointment of dean and vice-president in the Division of Student Life, serving until his retirement on 31 Dec. 1964. On that occasion Duke president Douglas M. Knight said of him: "Few men in American education are privileged to serve their University so long and so well as he has done—for these 40 years of devoted and single-minded service to Duke. Dr. Herring's primary interest and his primary responsibility were the same—a constant concern for the welfare of students during their undergraduate days." Herring was appointed vice-president emeritus in 1965. During the final year of his life, he served as general consultant to the administration of Louisburg College, Louisburg.

He was the recipient of many honors for his outstanding work in both civic and educational circles. He was selected in 1957 by the Durham Merchants Association as one of five "Fathers of the Year"; served as an official North Carolina delegate to the Southern Regional Conference on Education beyond the High School; was cited for outstanding leadership of the United Fund campaign in 1959; and was presented the Tau Kappa Alpha Distinguished Alumni Award for 1959, one of eight selected in the United States.

A dedicated layman, Herring was a member of Trinity Methodist Church, Durham, where he long taught the Julian S. Carr Bible Class, for which he was given a special citation in 1951. He saw military service as a member of the Student Army Training Corps at Trinity College in September-December 1918.

On 31 Dec. 1929, he married Virginia Cozart, of Stem, daughter of Wiley S. and Virginia Bacon Cozart. They had two children: Virginia Frank (Mrs. B. A. Lenski) and Herbert James, Jr. Herring died in Durham and was buried in Maplewood Cemetery.