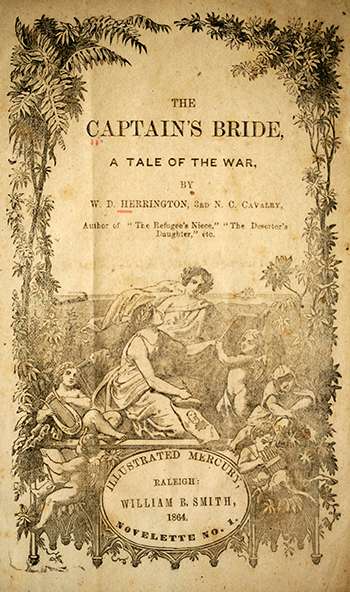 William D. Herrington, Confederate soldier and author, was born in Pitt County, probably the son of Moses Herrington and the brother of Lewis W., James L., and Mary A., all of whom were orphaned in 1858. The family name sometimes appears as Harrington, but apparently in error. William in 1858 became the ward of Churchill Perkins of Pactolus, the wealthiest man in the county, a planter, merchant, and longtime member of the General Assembly. Perkins was one of the founders of Jordan Plain Academy, which young Herrington may have attended; he was listed as a student and a member of Perkins's household in the 1860 census. The Pitt County Guardian Returns for 1858 indicate that Perkins held $595.95 for Herrington. On 5 May 1862 Herrington spent $115 for a horse, followed soon afterwards by other amounts for a pair of gaiters, a pair of fine blankets, several kinds of cloth probably for a uniform (as an additional sum was paid "to Mrs. May for work"), socks, and a shirt collar.

On 14 May 1862, in Raleigh, Herrington enlisted in the Third North Carolina Cavalry (also known as the Forty-first Regiment) and served in Company I until 15 Dec. 1864, when he transferred to the First Battalion, Sharp Shooters; either then or shortly afterwards he was promoted to corporal. It was reported that he sought this transfer "for the purpose of gathering material necessary to the completion of a Tale of the war, the plot of which was laid in the Shenandoah Valley." Herrington contributed "popular romances" to the Raleigh weekly, The Mercury.

In 1864, while still a member of the Third Cavalry, Herrington was the author of a "novelette," The Captain's Bride: A Tale of the War, published in Raleigh by Wm. B. Smith & Co. It was dedicated to Perkins "as an humble tribute of Gratitude to his Kindness and Benevolence, by his ever grateful ward the Author." The first printing of 5,000 copies was quickly sold out, and a second edition was published in February 1865, although a copy of only the first edition has survived. An advertisement reported that "This charming Story has been pronounced by both the press and the public as one of the most delightful contributions that has been made to Polite Southern Literature." It was followed by The Deserter's Daughter from the same publisher, copyrighted in 1864 but with the imprint date 1865 and actually published in early February. Both tales had previously been published in The Mercury. No separate printing of a third novel, The Refugee's Niece, is known to have survived, but it appears in The Mercury of 7 May 1864. A fourth story, "Viola; or, The Victim: A True Story of War and Love," was published in The Mercury of 22 and 29 Oct. 1864. These brief stories are well written, thoroughly loyal in sentiment to the Confederate cause, and tell of overcoming great odds. The settings are clearly eastern North Carolina, and undoubtedly reflect the author's military experience there.

While on duty in Virginia, Herrington was reported missing at Hatcher's Run on 6 Feb. 1865. Federal records describe him as a "Rebel deserter. Has taken the Oath of Allegiance." He actually signed an Oath of Amnesty at City Point, Va., 9 Feb. 1865, where he was described as "complexion-light; hair-light; eyes-blue; height-5 ft. 7 in." A Register of Refugees and Rebel Deserters, Provost Marshal General, Washington, D.C., states that he was received on 14 Feb. 1865, after which transportation was furnished to Madison, Wis.

No further trace has been found of Herrington. There is nothing in Madison to suggest that he ever lived there, nor can any record of him be found by the state historical agencies in the other states that existed at that time. A Raleigh newspaper, in reporting Herrington missing, observed that "he is possessed of indomitable energy. We hope he may soon be exchanged." When state indexes to the 1870 census become available, it may be possible to determine where he located and whether he continued to write.

Perkins, whose home still stands at Pactolus, made his last report as Herrington's guardian on 1 Jan. 1864. He died on 8 Nov. 1867 and his will, proved in February 1868, makes no mention of Herrington.