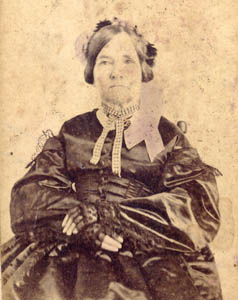 "Nancy" Ann Segur Hilliard, hotel keeper, was a native of Granville County, the daughter of William and Lucy Walker Hilliard. The family moved to Chapel Hill in 1817. During the 1830s and 1840s, Nancy was the proprietor of a boarding-house or inn previously run by Orange County sheriff Thomas D. Watts and his wife Lucy. Located near the site of present Graham Memorial, it was known for a time as the Hilliard Hotel and then the Eagle. For years it was considered the hotel in town.

The Eagle catered mainly to student boarders who paid from eight to ten dollars a month for meals described as "too good for college boys." Generous to a fault, Miss Hilliard too often extended credit to students pleading lack of money. It was said that she had energy and pluck, enjoyed extraordinary popularity and success, and was a candid and kind counselor. She was an institution in her own time.

Adult patrons arrived by coach and consisted of traveling men, general visitors, and relatives of students. President James K. Polk, a graduate of The University of North Carolina, arrived on 31 May 1847, at the invitation of university president David L. Swain, to attend commencement. He and his entourage were housed in a wing of the Eagle especially built for the occasion.

Reportedly, in 1852 Miss Hilliard sold the Eagle and built a house of her own, a neat white structure nicknamed the "Crystal Palace," where she kept a few boarders. It stood on the lot now occupied by the Planetarium gardens. Still later, it is said, she was manager of the "North Carolina Railroad eating-house at Company Shops, now Burlington."

Miss Hilliard's fortunes declined sharply with the advent of the Civil War and the closing of the university. In December 1869, the Crystal Palace was sold at auction for an unpaid debt of $750.23, the buyer paying $150.00. There followed a brief and disastrous attempt at hotel keeping in Raleigh. She returned to Chapel Hill and was given a free room at "the old Hotel." Odd sums sent by former students kept her going for a while. Yet she died virtually destitute and was buried in a grave next to her mother, close by the Philanthropic lot. Thirteen years later, "certain alumni" erected a stone enscribed: "in grateful remembrance of her unfailing kindness and hospitality."

Archibald Henderson, The Campus of the First State University (1949 [photograph]).