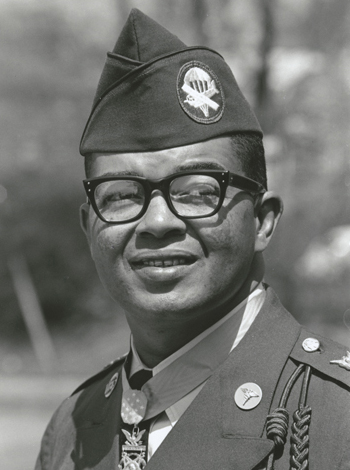 Lawrence Joel, the first black man to receive the Medal of Honor for battlefield heroism, was born in the slums of Winston-Salem to Trenton and Mary Ellen Joel, but at age eight he was unofficially adopted by Mr. and Mrs. Clayton Samuel. During his teens he peddled firewood door-to-door, and at age seventeen he joined the merchant marines. In 1946 he enlisted in the army and, except for a four-year interval, served until 1973.

On 8 Nov. 1965 near Bien Hoa in South Vietnam, Company C of the 1st Battalion, 503rd Infantry, 173rd Airborne Brigade, was attacked by a Viet Cong force that killed or wounded nearly every man in the lead American squad. Joel, a medical aidman, bandaged his own wound, injected himself with morphine, and then attended his wounded comrades within sight of the enemy. When he received 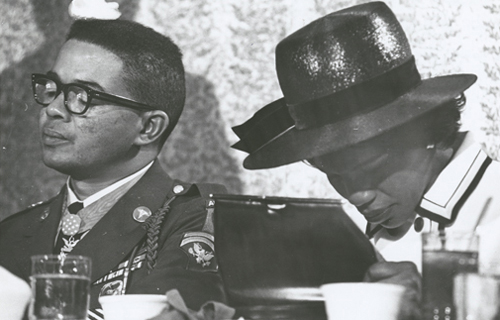 another bullet in the thigh, Joel continued to drag himself across the battlefield, treating thirteen more men before his medical supplies ran out. For his "courage, determination and professional skill," Joel was presented the Medal of Honor by President Lyndon B. Johnson at a White House ceremony on 9 Mar. 1967.

Joel's marriage to Dorothy Region produced two children—Tremaine and Deborah Louise—before it foundered. After his retirement from the army, Joel worked for the Veterans Administration in Hartford, Conn. However, suffering from diabetes and depression, he returned to Winston-Salem in 1982. Two years later he died there in a diabetic coma. He was buried in Arlington National Cemetery. In 1986 the Winston-Salem Board of Aldermen voted to name the city's new coliseum for Lawrence Joel.

Memory of Medal of Honor recipient could soon fade away at Walter Reed, by Jason Ukman. The Washington Post: http://www.washingtonpost.com/blogs/checkpoint-washington/post/memory-of-medal-of-honor-winner-could-fade-at-walter-reed/2011/07/13/gIQA5Rm4DI_blog.html

In 1970 I was fortunate to work with Lawrence Joel during his second tour in Vietnam. He was and remains my hero and inspiration.