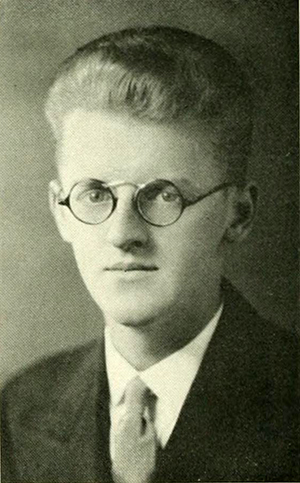 Thor Martin Johnson, musician and educator, was born in Wisconsin Rapids, Wis., the son of the Reverend Herbert B. and Anna Reusswig Johnson. In 1925 his father entered pastoral service in the Southern Province of the Moravian church, and the family moved to North Carolina, living for periods in Winston-Salem, Kernersville, and Mount Airy. Here, in the heartland of Moravian music, young Thor began his musical training. At age thirteen he organized and conducted a seventeen-member orchestra in Winston-Salem, demonstrating early the dedication and initiative of the distinguished musician and originator he became.

Johnson continued his musical training with formal studies at The University of North Carolina and conducted the North Carolina Little Symphony from 1932 until he received the A.B. degree in 1934. The next year he earned the Mus.M degree at the University of Michigan and conducted the university's Little Symphony until 1936. A scholarship awarded by the Beebe Foundation in 1935 enabled him to spend the following year in Europe. At the Salzburg Mozarteum he studied conducting under Felix Weingartner, Bruno Walter, and Nicolai Malko, and at the Conservatory of Leipzig under Hermann Abendroth. He later studied under Serge Koussevitsky in the United States.

When he returned from Europe, Johnson was appointed assistant professor of music at the University of Michigan, a post he held from 1937 to 1942. In 1938 he again became conductor of the University of Michigan Little Symphony, and in 1940 he began conducting the Grand Rapids Symphony Orchestra. During this period he also founded the Asheville (North Carolina) Mozart Festival, serving as its conductor from 1937 to 1941.

In 1942 Johnson left his posts in Michigan to enlist in the U.S. Army. While in the Army Air Corps he founded the U.S. Air Force Symphony Orchestra, the original soldier symphony in the U.S. armed forces.

After the war he spent a year as orchestral conductor at the Juilliard School of Music before becoming the permanent conductor of the Cincinnati Symphony Orchestra. The first American-born and American-trained conductor of a major American orchestra, Johnson held this position from 1947 to 1958. By 1951 he had earned a doctorate in music from The University of North Carolina; in the same year, he won the National Man of Music Award.

In 1958 Johnson joined the music faculty at Northwestern University, teaching there with the rank of professor until 1964. From 1964 to 1967 he was director of the Interlochen Arts Academy, where he did much to develop the talents of youthful musicians, encouraging them to meet his demands for excellence in music while inspiring them with his personal warmth. In 1967 he became the music director of the Nashville Symphony Orchestra, a post he held until his death.

A musician of considerable reputation, Johnson appeared as guest conductor with most major American orchestras, including the Boston Symphony, Chicago Symphony, Philadelphia Orchestra, and New York Philharmonic. He received honorary doctorates from a number of colleges and universities and was the recipient of several prizes, including the Alice B. Ditson Prize in 1949 and the Sachs Award in 1950.

Johnson never married. He died in Nashville, Tenn., and was buried in God's Acre, the cemetery of the Home Moravian Church, Winston-Salem.