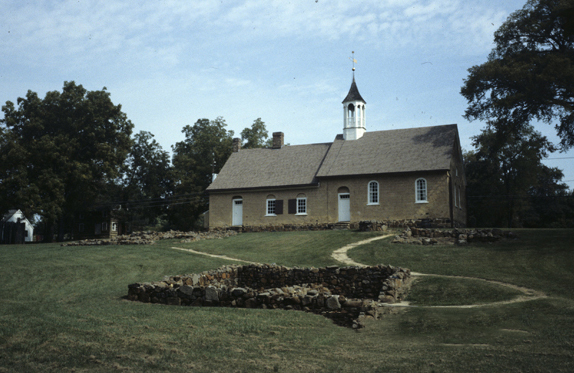 Hans Martin Kalberlahn, physician, was born in Drontheim, Norway. His parents were of the Lutheran faith, and he was sent to school regularly in the Lutheran fashion. After completing elementary school at age fifteen, he entered training as a surgeon. On completion of his studies in 1743, at age twenty-one, he set out on his "wander-Jahre," a practice to put the finishing touch on the education of European youth of that period. With his credentials, the young man traveled from city to city to get to know the world, practicing his profession to make his way. He visited Travemunde, Bergen, Hamburg, Lübeck, Copenhagen, and Slagelse. Returning to Copenhagen in 1745, Kalberlahn became associated with a surgeon and remained for two years. During this period he was frequently in the company of the Moravian Brethren. He became particularly interested in the missionary work of the Moravians and desired to become more involved with that religious group. In 1747 he traveled to the Moravian center of Herrnhaag near Frankfurt, Germany, where he worked with Dr. John Matthew Otto. When Otto emigrated to Pennsylvania in 1750, Kalberlahn replaced him as physician for the Single Brethren.

In 1753, the governing board of the Moravian church appointed Kalberlahn physician for the initial group of pioneers assigned to carry the gospel to the Indians in the vicinity of Wachovia, N.C. Kalberlahn left Herrnhaag on 2 May and arrived in Bethlehem, Pa., on 14 September. Twenty-four days later he set out with thirteen other single men on a long, hard journey to the primitive area of Forsyth County, N.C., arriving at a place called Bethabara on 17 November.

The settlers in Bethabara had in Kalberlahn a beloved physician who served them faithfully, not only in medicine but also in many other ways. Moreover neighbors—who previously had not known where to turn when they were ill—began flocking to him from a one-hundred-mile radius. He set their broken bones, healed their wounds, did the necessary surgery, and sheltered the sick for considerable periods of time. He also visited the homes of those who were too ill to travel. At times he was away for as long as five days, visiting the sick in the Yadkin valley, the mountains of Virginia, and other distant areas.

Kalberlahn planted an extensive herb garden in 1756 and introduced several new botanicals to North Carolina. Most of his medications had to be manufactured from plants that were grown in the area. One popular medication at this time was tar water, reputed to be a preventative against smallpox. According to Moravian records, each year the men gathered pine boughs to make tar for the medicine that Kalberlahn needed.

In April 1758 he returned to Bethlehem, Pa., to work for a time with his former colleague, Dr. Otto. While in Pennsylvania he met and married Anna Catharina Antes, who accompanied him on his return to Bethabara in May 1759.

Kalberlahn found the place crowded with refugees from the French and Indian War. To compound the problem, there had been a famine in the area that spring and many of the refugees and inhabitants were underfed. The two forts at Bethabara were overflowing with hungry, frightened neighbors who had sought refuge from marauding Indian bands. In the latter part of June, a severe epidemic of fever—most likely typhus, promoted by malnourishment and crowded conditions—broke out and swept rapidly through Bethabara, lingering until cold weather appeared. Out of two hundred sheltered there, only fourteen were spared the disease. Its fourth victim was Kalberlahn, who died after a four-day illness, one day before the first anniversary of his marriage, at age thirty-seven. In the records, the tall, blue-eyed, blond physician is described as "an angel of mercy" and "the sainted Kalberlahn."

A Short Tour of Forsyth's Medical Past, Wake Forest School of Medicine: http://www.wakehealth.edu/Library/A-Short-Tour-of-Forsyth-s-Medical-Past%281%29.htm

Great article. I would like to offer one correction, however. From the beginning, Wachovia was intended to serve as a center for industry, producing money for the Moravian church. There was also a need for a place to settle a large number of Moravians who had been displaced in Hesse when they were evicted from their lands there.
There was never an intent to send missionaries in the south. In fact, several letters survive in which Bishop Spangenberg firmly reminds the people of Wachovia that they were to have no part in mission activities at all.
It was not until much later, in 1794, that the church began to explore conducting mission work in the southeast. Of course, Spring Hill emerged in the early 19th century.

Thank you for visiting NCpedia and especially for taking time to share this information.  You may be interested in this NCpedia entry specifically about Wachovia.  It does discuss the fact that Wachovia was founded as a center of economic communalism -- http://www.ncpedia.org/wachovia.  I have also added a “see also” to the entry on Kalberlahn for the Wachovia community article for more information and context.  I appreciate your post – it alerted to me to do this!

We do not have anything on a Spring Hill Moravian community in North Carolina - nor can I find anything readily about it.  Do you know if this was a North Carolina community?  If you have more information, please let us know!  Feel free to post again in NCpedia or let me know by email.

Best wishes and please let me know if I can answer any questions,

Historic Bethabara is located in the county of FORSYTH, North Carolina, not Rowan County.

Thank you so much for visiting NCpedia and taking the time to post this correction.  This article comes from the Dictionary of North Carolina Biography which is published by our content partner UNC Press and appears in NCpedia by agreement with them.  We will look into working with them to make this important change to the content of this article.

We rely on our readers to help us make our content as accurate as possible and are always grateful when they take the time to keep us informed.