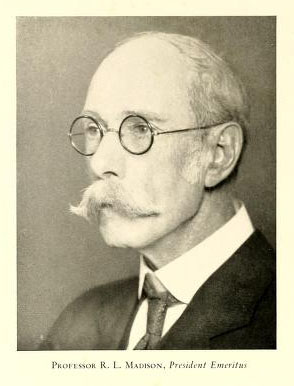 Robert Lee Madison, educator, legislator, and founder of Cullowhee High School, which became Western Carolina University, was born in Staunton, Va., the son of Robert Lewis and Helen Banister Madison and a descendant of President James Madison. His father was a staff physician at Virginia Military Institute, Lexington, and the physician of General Robert E. Lee. Because of the friendship that developed from the relationship, the senior Madison named his younger son Robert Lee.

In his youth Robert Lee had expected to become a doctor like his father, two uncles, and four cousins, yet his interests changed. In 1885 he received a Ph.B. degree from the University of Chattanooga, from which he later earned an A.M. degree in 1890. In taking a break from the rigors of preparing for medical school and to oblige his older brother Monroe, Robert Lee moved to North Carolina. For a time he taught at Qualla, near the Cherokee Indian reservation, but left in 1888 to take a teaching position in Sylva. Here, at age twenty-one, he also served as editor of the Tuckaseigee Democrat, the county newspaper. He was exact and precise in both activities, often working all day and late into the night to achieve his goals.

When the Cullowhee Academy offered him a post in 1889, Madison came to the realization that he wanted to stay in North Carolina. "So I resolved, God willing, to remain in this region and to do my best to begin supplying the very real educational needs of the mountain boys and girls," he wrote.

With the backing of the community, a semiprivate school was opened with eighteen pupils. By the end of the first year enrollment had reached one hundred. After the school had been running successfully for two years, the General Assembly in 1891 gave it a charter and officially named it Cullowhee High School. In 1893 Madison worked to obtain state support for the school; until this time Cullowhee's residents had provided all the funding. As a result of his efforts, the legislature appropriated $1,500 for the establishment of a "normal department." With this modest sum the school began to train teachers.

From this point the mountain school began to grow. In 1905 its name was changed to Cullowhee Normal and Industrial School. Successively, the school became Western Carolina Teachers College, Western Carolina College, and finally Western Carolina University. Madison served as president from 1889 to 1912 and from 1920 to 1923, after which he was named president emeritus. In 1912 he had been asked to resign because of the decline in the number of women enrolling and because the board of directors had the notion that he was too complacent about how the school was being run. Nevertheless, Madison served another term as president (1920–23) and continued as a professor of languages until his final retirement in 1937.

In 1925 he served a term in the state legislature, where he sat on seven committees and introduced the first recorded sales tax bill. In addition, he was a member of the Jackson County Board of Education for seventeen years.

Madison married Ella Virginia Richards of Elizabeth, N.J.; she had gone to Cullowhee as a music and art teacher. They were the parents of six children: Robert Edward, Jane Ambrose, Annie Louise, Monroe Bolling, William Haight, and John Banister.