John Manning, naval commander, was born in Edenton, the son of Joseph and Sarah Pell Manning. His father was a captain of a volunteer company in the War of 1812. John Manning was appointed a midshipman in the U.S. Navy on 10 May 1820, serving four years in the West India Station and Gulf of Mexico, three years on the Pacific west coast of South America, and one year in the naval school at New York. Promoted to lieutenant on 17 May 1828, he served in that rank for twenty-three years. 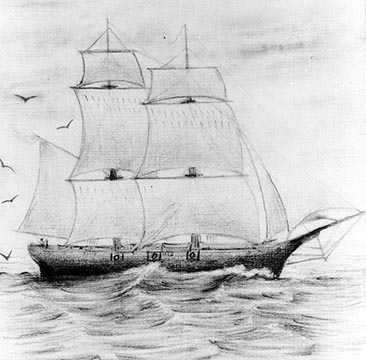 After commanding the brig Bainbridge for about one year, Manning was promoted to commander on 13 Oct. 1851. He remained with the Bainbridge on the west coast of Africa until relieved of his command at New York about 1 Sept. 1853. In January 1854 Commander Manning was given command of the receiving ship Pennsylvania at Norfolk, Va. In September 1855 he was relieved of that command by James C. Dobbin, secretary of the navy. He was not informed as to why he was relieved, but knowing there were no charges against him he assumed it was because of a serious bronchial affliction he had developed from so many years at sea. Secretary Dobbin's letter to Manning praised him highly for his command of the Bainbridge, as did Commander William L. Hudson's report to the commandant of the New York Navy Yard, Captain Charles Boarman, following inspection of the Bainbridge when she returned to New York after three years at sea.

Manning had been on the U.S. Naval Reserve list for almost six years when he resigned his commission on 18 May 1861. On 1 June he was appointed chief of bureau, ordnance, clothing, and provisions at New Bern. He was discharged from this post after only two months in compliance with an Ordinance of the Convention of North Carolina, transferring the navy of North Carolina to the Confederate government. He was then activated as a commander of the Confederate navy. He died at the home of his son, John, Jr., and was buried in Pittsboro. Manning and his wife, Tamar Haughton Leary, also had another son, Joseph Alonzo.

United States. Bureau of Naval Personnel; Adams, John. Register of the commissioned and warrant officers of the Navy of the United States including Officers of the Marine Corps, &c. for the year 1830. City of Washington: W.A. Davis. 1830. 12. https://archive.org/stream/registerofcommis1830unit#page/12/mode/2up (accessed July 16, 2013).