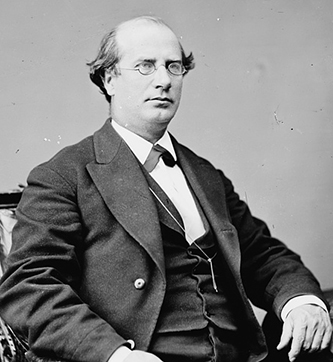 John Manning, Jr., lawyer, congressman, and teacher, was born at Edenton. His grandfather, Joseph Manning, was the first of the family to settle in North Carolina; in 1803 Joseph left the plantation known as Manning Manor near Norfolk, Va., moving first to Currituck County and then to Edenton, where he became a merchant. John's father was a commander in the U.S. Navy before holding that rank in the Confederate navy at the beginning of the Civil War. In 1829 John, Sr., married Tamar Haughton Leary, a member of one of Chowan County's oldest families. In addition to John, Jr., they had a son, Dr. Joseph Alonzo, who died at age twenty-six.

John Manning, Jr., attended Edenton Academy. Later his parents moved to Norfolk and he entered Norfolk Military Academy, where he was promoted to captain of the cadets in his senior year. Entering the sophomore class of The University of North Carolina, he was graduated near the top of his class after only two years. He then sailed with his father to South America. On his return he read law in the office of his cousin, John H. Haughton, in Pittsboro. In 1852 he obtained his license and after the statutory period of twelve months was permitted to appear in the superior and supreme courts. He then formed a partnership with Haughton. The young, overworked lawyer, an "old-line Whig" in politics, was often solicited to be a candidate for a seat in the General Assembly, which he firmly declined, believing his first duty was to his clients. He likewise declined appointment to the offices of secretary of state and judge of the superior court.

When the Civil War began, Manning enlisted in the Chatham Rifles, soon becoming first lieutenant and then adjutant of his regiment, the Fifteenth Volunteers. While his regiment was at Yorktown, he was appointed as receiver under the sequestration acts. He held this very responsible office throughout the war. On 17 May 1861 he was a delegate to the Secession Convention in Raleigh. There he pledged himself to the policy of meeting force with force, although deploring the haste with which the convention adopted the constitutions of the provisional government and the Confederate States of America.

When the war ended, Manning returned to the practice of law until November 1870, when he was elected a member of the Forty-first Congress. On the expiration of this short term, he won reelection and continued to hold his seat until he was elected a delegate to the constitutional convention of 1875, which was called to change features in the Constitution adopted in 1868 that were not suitable to conditions in North Carolina. His work there extended his reputation as a prudent statesman and lawyer.

In 1874, when the election of trustees of The University of North Carolina was taken from the Board of Education and given to the General Assembly, Manning was chosen as a trustee. He remained in that post for twenty years, participating in all the measures leading to the university's revival in 1875. While a member of the General Assembly in 1881, he took part in securing the university's first annual appropriation from the state. At the same session Manning, William T. Dortch, and John S. Henderson were appointed commissioners to revise and consolidate the public laws of the state. Such was their diligence that on 2 Mar. 1883 The Code of North Carolina was ratified as law.

In 1881, without his knowledge, the university board of trustees unanimously elected Manning professor of law to fill the vacancy created by the death of William H. Battle. This required him to move his large family to Chapel Hill, with no salary promised; he could rely only on fees from his students and emoluments from his profession, which necessarily were diminished by the incessant demands of his new duties. Beginning with a class of seven, he built enrollment to eighty-seven students by 1897–98. In 1883 he received the honorary degree of LL.D., which was conferred, as President Kemp P. Battle observed, not only as a tribute to his learning but also in recognition of his valuable services in behalf of his alma mater. It was Dr. Manning's purpose to prepare a series of works that would adapt Blackstone's Commentaries on English Common Law to modern needs. His Commentaries on the First Book of Blackstone, published after his death, gave evidence of the high quality of the work he was fitted to do.

Manning was an active member of the Episcopal church and held all its offices open to laymen, including a seat in the General Convention. He often was a lay reader supplying the minister's place.

On 5 June 1856 he married Louisa J. Hall, of Pittsboro, the daughter of Dr. Isaac Hall, a noted physician, and the granddaughter of John Hall, one of the first three justices of the North Carolina Supreme Court. They raised eight children: John Moore, a Durham physician and mayor for many years; James Smith, a Durham lawyer, who became attorney general and then a supreme court justice of North Carolina; Isaac Hall, dean of The University of North Carolina School of Medicine; Mary Southerland; Sally Charleton, wife of Dr. F. P. Venable, president of The University of North Carolina; Eliza H., wife of William Weldon Huske of Fayetteville; Tamar H., wife of the Reverend Gaston Battle of Edgecombe County; and Louise H., wife of Professor William R. Webb of Webb School, Bellbuckle, Tenn.

John Manning was buried in Pittsboro. Manning Hall, The University of North Carolina's law school building, was named for him. A portrait hangs in the present law school building; another portrait was owned by his grandson, John T. Manning, an attorney of Chapel Hill.

The Life and Influence of John Manning (n.d.).

"John Manning, Jr. and Manning Hall." The Carolina Story. The University Library and The UNC Center for the Study of the American South. http://museum.unc.edu/exhibits/names/john-manning-jr-and-manning-hall/ (accessed July 15, 2013).