Kemp Plummer Battle, lawyer, railroad president, university president, educator, and historian, was born at Louisburg. He was the fourth child and third son of William Horn Battle, a distinguished North Carolina jurist, and Lucy Martin Plummer Battle. He was a great-grandson of Elisha Battle, a native of Nansemond County, Va., who in 1748 moved to the Tar River country of North Carolina and became a prominent member of the Baptist denomination and a civic and political leader. Two of Kemp Battle's brothers, Julian (b. 1826) and Thomas Devereaux (b. 1837), died in infancy. His remaining five brothers, like Kemp himself, were graduates of The University of North Carolina. His two youngest brothers, Wesley Lewis (1843–63) and Junius Cullen (1841–62), both died of battle wounds during the Civil War. His older brother, Joel (b. 1828), studied medicine for one year with a maternal uncle and then attended the University of Pennsylvania, from which he received the M.D. degree. He entered practice with a fair prospect of success but was forced by ill health to abandon medicine for the less demanding occupation of country merchant. He died in 1858. A younger brother, William Horn, Jr. (1833–93), also became a physician. After receiving his M.D. from the Medical College of South Carolina, he practiced medicine for many years at Lilesville. A third brother, Richard Henry (1835–1912), practiced law in Raleigh after a brief period of practice in Wadesboro. Kemp's older sister, Susan Catharine (1830–67), died unmarried 22 years after a fall from a runaway horse had left her an invalid for life. His younger sister, Mary Johnston (b. 1840), who married William Van Wyck II of New York, died unexpectedly in 1865, leaving a one-day-old daughter.

Battle received his early training in private schools in Louisburg, Raleigh, and Chapel Hill. He entered The University of North Carolina as a freshman in 1845 and was graduated with first honors as valedictorian of his class in 1849. During 1849–50 he served as tutor of Latin in the university, and for the following four years he was tutor of mathematics, meanwhile studying law with his father. He was admitted to the bar in 1854 and entered the practice of law in Raleigh. The following year he was married to his distant cousin, Martha Ann ("Pattie") Battle, daughter of James S. Battle of Edgecombe County, planter and cotton manufacturer. In 1857 he was named a director of the newly rechartered Bank of North Carolina. In 1861 he was chosen a delegate from Wake County to the Secession Convention and signed the Ordinance of Secession, though he had been a strong Union man prior to Lincoln's call for troops to coerce the seceding states. During the Civil War he served as president of the Chatham Railroad, which was organized to haul coal from the coal fields of Chatham County to the Confederate armament factories. 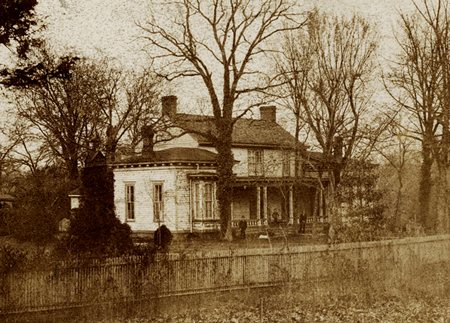 In 1862 the legislature made Battle a trustee of The University of North Carolina, a position he held until the entire board was discharged by the Reconstruction General Assembly of 1868. Renamed to the board in 1874, he served through successive reappointments until his death. He was elected state treasurer in 1866, but the U.S. military authorities removed him from office in 1868 in the process of carrying out congressional Reconstruction. From 1869 to 1871 he served as president of the State Fair Association at Raleigh, and he was for many years a member of the state board of agriculture. In 1875 he was active in the reopening of The University of North Carolina, closed since 1871. He personally solicited funds for the repair of campus buildings and was one of the leaders in persuading the legislature to grant the state's income from the Morrill Land Grant Act of 1862 to the university. These funds, which the university continued to receive until 1887, made possible the resumption of classes.

Named president of the university in 1876, Battle served until 1891, when he resigned to become Alumni Professor of History; he hoped thenceforth to devote his energies to teaching history by "the modern methods of instruction in the use of original sources to produce monographs of great men, institutions, and the progress of national questions." Toward this end, he worked, with little immediate success, to accumulate an adequate collection of historical works in the university library and to procure a "historical museum under a salaried curator, in a fire-proof building," where he could display manuscripts, other valuable papers, and relics, including those collected by the North Carolina Historical Society, which were then in the university's safekeeping, though the society retained legal title to them.

The society, founded in 1844 by David L. Swain, then president of The University of North Carolina, had declined rapidly in membership and influence after Swain's death in 1868. Battle's attempts to revive the society as a state-wide organization met with little success, and it became in effect a subsidiary of the university, with its membership virtually limited to the university faculty and student body. Under Battle's leadership, the society collected by 1900 a good deal of material for the university library.

Battle also instituted graduate study in history at the university. Much of the research done by his students was of potential value to the public, but the university had no funds to publish most of it. Although a partial solution to the problem was provided by the University Magazine, which printed many biographical sketches and narratives of past events, there remained a need for the occasional publication of monographs "in a more compact and convenient shape." Beginning in 1900, this need was met by the James Sprunt Historical Monographs. Endowed by James Sprunt, a Wilmington businessman, and published under the auspices of the department of history, the monographs provided a convenient medium of publication for some of the research done by the faculty and students. As a condition of the endowment, Battle was made editor of the monographs during his tenure at the university. Consequently, he edited and prepared for publication the first seven numbers of the series.

Battle contributed to the dissemination of historical information in a number of other ways. He gave lectures on historical subjects, especially the United States and North Carolina, before various types of groups throughout the state. He was a founder of the short-lived but influential Southern History Association and served throughout the eleven years of the organization's existence (1896–1907) as a member of its administrative council.

Despite the various demands upon his time, Battle was a productive historian. He wrote seven numbers of the North Carolina Booklets, a series dealing with the history of the state that was published by the North Carolina Society of the Daughters of the Revolution, and wrote numerous historical articles for the periodical press as well as a number of sketches for Ashe's Biographical History of North Carolina. His major work was the History of the University of North Carolina in two volumes, still in 1965 considered a "significant study." This work excepted, Battle's personal contributions to historical literature, like those of most of his generation of history professors, were based on scanty sources and consequently were narrow in conception and shallow in interpretation.

Kemp Plummer Battle was the father of three daughters and four sons. His first child, Cornelia Viola (1857–86), married Richard H. Lewis II, a Raleigh physician. His two younger daughters were Susan Martin (1864–70) and Penelope Bradford (1866–68). His second child and first son, Kemp Plummer, Jr. (1859–1922), became a physician and medical school professor. His second son, Thomas Hall (1860–1936), practiced law in Tarboro and Rocky Mount and served for several years as president of the Bank of Rocky Mount and treasurer and general manager of the Rocky Mount Mills. The third son, Herbert Bemerton (1862–1929), received the Ph.D. degree in chemistry from The University of North Carolina and served for several years as director of the North Carolina Agricultural Experiment Station. Battle's youngest child was William James (1870–1955); after taking the A.B. (1888) and the A.M. (1889) degrees at The University of North Carolina, he undertook graduate work at Harvard, where he was awarded the Ph.D. in 1893. He taught the classical languages at the universities of Chicago, Cincinnati, and Texas and served for many years as dean of the latter school and for a time as its acting president.

In politics, Battle was an antebellum Whig and a postbellum Democrat. In religion he was an Episcopalian. Numerous photographs survive, several of which have been reproduced in his published memoirs, Memories of an Old-Time Tar Heel, and in his History of the University of North Carolina, vol. 2.