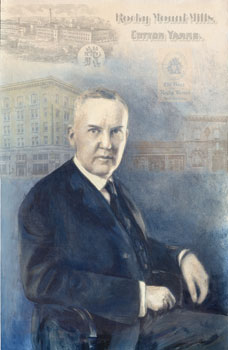 Thomas Hall Battle, banker, industrialist, attorney, and educator, was born in Raleigh, a descendant of a long line of jurists and educators. His father was Kemp P. Battle, president of The University of North Carolina. He spent his early life in Raleigh, attended school there, and enrolled in The University of North Carolina, graduating at the head of his class in 1880. He taught school and traveled briefly before reading law at the university under Dr. John Manning. After gaining his law license in 1882, he moved to Tarboro, practiced law briefly, and became a solicitor of the court in Edgecombe County. Three years later he moved to Rocky Mount and practiced law, but there he became involved in corporate business with the Rocky Mount Mills, first as a director, later for twelve years as president, and finally as treasurer.

As a financial leader, he organized the Bank of Rocky Mount in 1889, serving later as its president. He also helped organize and headed the Rocky Mount Savings and Loan Company and the Rocky Mount Insurance and Investment Company. As early as 1892 he urged the formation of a state banking association, which was created when the North Carolina Bankers Association was organized at Morehead City in July of 1897, with Battle as the first president.

Born in war and educated during Reconstruction, Battle became a symbol of the group of North Carolina leaders who contributed importantly to the rebuilding of the state after the ravages of war.

Battle was married three times: in 1887 to Bettie Davis of Wilson, who died in 1890; in 1895 to Sallie G. Hyman of Tarboro, who died in 1917; and in 1920 to Mary Weddell of Tarboro. There were six children: Kemp Davis, Hyman L., Ethel, Josephine, Martha Ann, and Mary Thomas. Portraits of Battle are in various places, including the North Carolina Bankers Association.