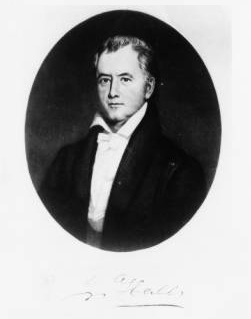 John Hall, justice of the North Carolina Supreme Court at the time of its organization in 1818, was born in Augusta County, Va. His father, Edward Hall, a native of Ireland, settled in Pennsylvania about 1736 but later made his home in Virginia. In the spring of 1744 Edward married Eleanor Stuart, a daughter of Archibald Stuart, Sr., of the noted family that produced Judge Archibald Stuart, Jr., the Honorable A. H. H. Stuart of President Fillmore's cabinet, and General J. E. B. Stuart of the Confederate Army.

After due preparation John Hall entered William and Mary College. He then studied law at Staunton, Va., under his kinsman, Judge Archibald Stuart, for whom he cherished an ardent gratitude and later named a son. At about age twenty-five Hall, having completed his legal studies, located at Warrenton, N.C., where he remained throughout his life. He was not a talented orator, but his splendid intellect and rich store of legal knowledge soon drew a profitable clientele.

In 1800, Hall took his seat on the Superior Court bench, a position he held until 1818, when he became one of the justices of the newly established North Carolina Supreme Court. Upon the organization of this court on 1 Jan. 1818, John Louis Taylor was appointed chief justice with Leonard Henderson and John Hall as associate justices. The court first sat for the dispatch of business on 1 Jan. 1819. Hall remained on the bench until December 1832, when he resigned because of ill health. In 1829, he was chosen one of the presidential electors from North Carolina. Although his position on the court prevented his active participation in the political campaigns of the day, he was a pronounced Democrat of the Jeffersonian school. He was also a Mason and Senior Grand Warden from 1802 to 1805.

Hall initially was a Presbyterian, but he eventually joined the Episcopal church and received its sacraments upon his death from cancer of the throat. On 31 January, when news of the death of Judge Hall reached Raleigh, a joint meeting of the bench and bar was held in honor of his memory. At this meeting Chief Justice Leonard Henderson presided, and William H. Haywood, Jr., afterwards a U.S. senator, acted as secretary. Among other resolutions it was resolved that, "in testimony of this respect and affection, we will wear the usual badge of mourning for thirty days."

Hall married Mary Weldon, the daughter of William Weldon and granddaughter of Lieutenant Colonel Samuel Weldon, an officer of North Carolina militia during the American Revolution. By her he left a large number of children, including Dr. Issac Hall, a physician in Warrenton and later of Pittsboro, who married Eliza, the daughter of Peter Evans, and Judge Edward Hall, who occupied a seat on the Superior Court bench in 1840–41. An oil portrait of John Hall hangs in the Supreme Court, Raleigh, and another is owned by the Masonic Grand Lodge of North Carolina.