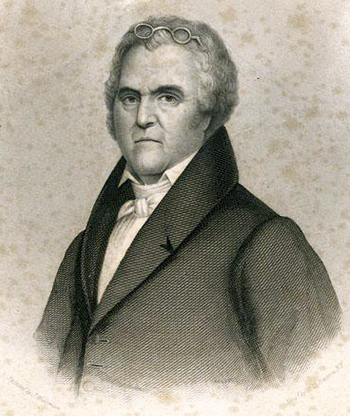 Leonard Henderson, lawyer, teacher, and chief justice of the North Carolina Supreme Court, was born in the Nutbush community near Williamsboro, Granville County, the third son of six children of Richard and Elizabeth Keeling Henderson. His grandfather was Samuel Henderson, first sheriff of the county, and his wife, Elizabeth Williams, who had moved there from Hanover, Va., in 1740. At their home, Jonesboro, the Richard Hendersons raised two daughters (Fannie, who married Judge Spruce Macay; and Elizabeth, who became Mrs. William Lee Alexander) and four sons (Richard, who moved to Virginia and became a judge; Archibald, who moved to Salisbury and there married the sister of Governor Nathaniel Alexander; Leonard; and John Lawson, who often represented the borough of Salisbury in the General Assembly, and was comptroller of the state and clerk of the Supreme Court in Raleigh).

Leonard's education was confined to instruction by local teachers and the Reverend Henry Pattillo, the prescribed courses at Springer College, and one or two sessions at a school in Salisbury. Afterwards he studied law at Williamsboro under Judge John Williams, of Montpelier, who had married Henderson's maternal grandmother and with whom he lived after the death of his parents. He was admitted to the bar and for a time was clerk of the district court in Hillsborough. A Freemason, in 1797 he was senior warden of Hiram Lodge No. 24. In 1802 he was elected to the Council of State, and in 1807 he was appointed a commissioner of the town of Williamsboro.

In 1808, two years after the district system of courts was abolished, Henderson was elected by the General Assembly to fill a vacancy on the Superior Court bench caused by the death of Judge Spruce Macay. The election of Henderson, a thoroughgoing Federalist and an ardent supporter of Alexander Hamilton and John Marshall, was a high tribute to his character and eminent qualifications, as the legislature was solidly Republican. About this time Henderson opened a law school at Williamsboro and soon earned a reputation for thoroughness and accuracy. Although he did not formulate the case method of instruction, his pupils were well versed in concrete cases selected by Henderson from numerous volumes. Among the many young men who studied with him were Richmond M. Pearson, William Horn Battle, Robert Ballard Gilliam, Robert H. Burton, and Hutchins G. Burton. The school at Henderson's home, Jonesboro, was the forerunner of Richmond Hill and The University of North Carolina law schools.

After eight years as a Superior Court judge and with a growing family, Henderson resigned in 1816 to resume his law practice in Williamsboro and teach in his law school. In 1817 he was elected a trustee of The University of North Carolina, serving until his resignation in 1828. Late in 1818 the court system was again changed and the Supreme Court of North Carolina was established. Judges Henderson and John Hall, with John Louis Taylor as chief justice, comprised the first court. In 1829, after the death of Taylor, Henderson became chief justice, a position he held until his own death.

Henderson County and the cities of Henderson and Hendersonville were all named in the judge's honor. He was described as a large man, over six feet tall and weighing 212 pounds, with dark hair, gray eyes, a large, symmetrical head, and a long chin. He was buried at Montpelier, his childhood home, and survived by his wife, Frances Farrar, whom he had married on 3 Nov. 1795; she was the niece of Judge John Williams, who had guided his legal studies at Williamsboro. They had four sons and two daughters: Archibald Erskine, William Farrar, John Leonard, and Richard (who died three years before his father), Fannie (who married Dr. William V. Taylor and moved to Memphis, Tenn.), and Lucy (who married Dr. Richard Sneed and moved to Henderson, Ky.).

A portrait of Chief Justice Henderson was presented to the North Carolina Supreme Court on 20 Apr. 1909.